The CIArb community congratulates colleagues and celebrates the following successes at this year's GAR Awards:

Last night, the GAR Awards celebrated a decade of recognising outstanding contributions by individuals, groups, and organisations to the world of arbitration. Originally scheduled to be held on 2 April 2020 at the InterContinental Paris le Grand, for the very first time (in response to the COVID-19 situation) the awards has been moved online and has gone virtual via online platform Zoom.

As part of the adapted Paris Arbitration Week, the GAR Awards opened its virtual gates to delegates at approximately 5.30pm for networking, followed by the awards ceremony and post-presentation social networking amongst peers and colleagues. With more than fifty nominations announced to numerous categories, the event once again showcased recognition of the best of handpicked entries from global alternative dispute resolution (ADR) efforts.

Timothy Cooke FCIArb (Vice-Chair of the sub-committee on witness conferencing established by the Singapore Branch of CIArb in 2017) and Camilla Godman FCIArb (Director of Membership at CIArb) received the award for the 'Best innovation by an individual or organisation' on behalf of the Institute via a pre-recorded acceptance speech. Timothy and Camilla, thanking colleagues and GAR for the prestigious recognition:

Timothy: "I'd like to thank everyone who is involved in the preparation of the guidelines in particular to the sub-committee that was formed in Singapore and from that committee Emily Choo, Richard Hayler, James Church-Morley, Isidore Tan, and Jonathan Ellis".

Camilla: "Thank you for this award, which is credit firstly to the fantastic work of Timothy's committee and secondly to CIArb's commitment to the development of innovative techniques to support the profession and raise standards".

Image: Timothy Cooke FCIArb and Camilla Godman FCIArb receives the 'Best innovation by an individual or organisation' award on behalf of CIArb

Professor Stavros Brekoulakis ACIArb on his 'Best lecture or speech' award: "As you may know the lecture was dedicated to Professor Roebuck who was alive when I gave the lecture a year ago, but he sadly passed away earlier this year. It is only appropriate to dedicate this award to his memory...". 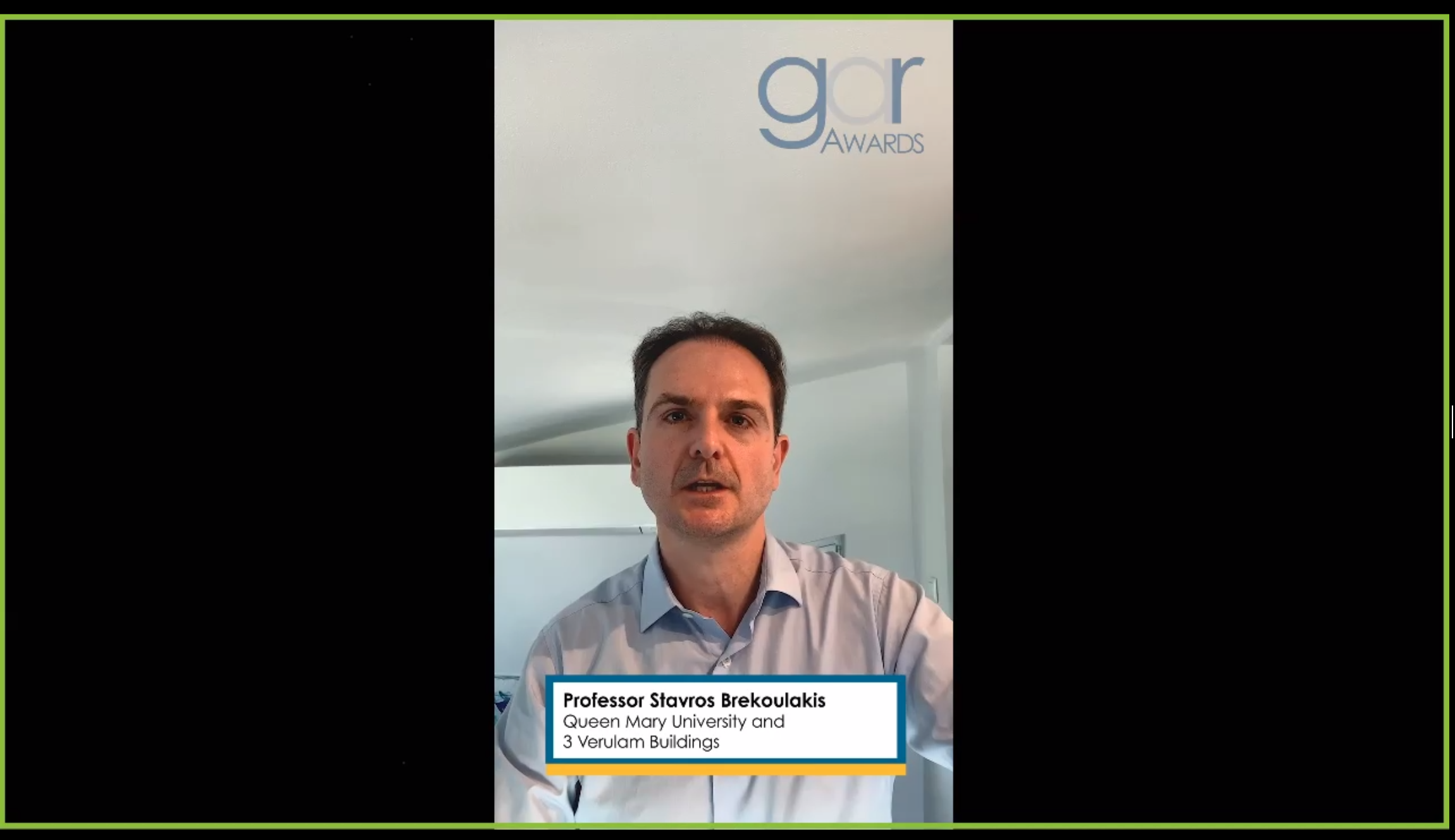 It is to be noted that this is the first year GAR Awards published a public shortlist for the Equal Representation in Arbitration Pledge Award - with GAR working together with the Pledge ('an initiative that seeks to increase, on an equal opportunity basis, the number of women appointed as arbitrators in order to achieve a fair representation as soon practically possible, with the ultimate goal of full parity') which CIArb passionately supports.

The event also unveiled the annual ranking of the world's most active arbitration practices - GAR 30 (King & Spalding on top of the list), and paid tribute to V.V. Veeder QC FCIArb with a GAR 'Lifetime Achievement Award'.

Proceeds from the online event gets donated to the Swawou School for Girls in Sierra Leone with GAR Awards delegates playing a role in supporting the event's commitment to the cause - by attending - during the current ongoing pandemic.

More information about the GAR Awards 2020.