Regional Director for the Far East and Australasia 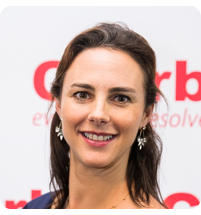 Camilla joined CIArb in June 2015 as Regional Director for the Far East & Australasia. She is an arbitration lawyer (qualifying in London in 2004) and was a senior associate in the Ashurst Singapore disputes team until 2012.

She moved to Singapore in 2008. She was Deputy Registrar at the Singapore International Arbitration Centre (SIAC) in 2012/2013 where, amongst others, she managed a record number of emergency arbitrations and was heavily involved in establishing and implementing the 5th edition of SIAC Rules (effective 1 April 2013).

She has extensive experience in international arbitration and specifically in construction and commercial disputes. She was seconded to a Japanese trading company, working on various projects throughout the Asia-Pacific region. She also has mediation experience.

Camilla is responsible for overseeing the strategic development of CIArb in the Far East & Australasia. Camilla works closely with the active branch network in the region in the delivery of member and educational services.

She seeks to identify new opportunities for CIArb to strengthen engagement with members and the ADR community. Camilla is committed to the growth of ADR and to its enormous benefits.

Camilla has three young children and escapes for a long run whenever she can.