This is an online event hosted by CIArb’s YMG, taking place on 4 February 2021. This event is part of the South America leg of the CIArb YMG World Tour 2021. This event takes place at 09.30 pm GMT, 6.30 pm Brazil/Uruguay time, please check your local time zone.

WEEK 3, THE SOUTH AMERICA SERIES: In the past decade, the use of ADR has substantially increased in South America to promote access to justice and strengthen the rule of law. Now with many sanitary measures ordering lockdowns even of courthouses, arbitration and ADR reappear as an expedite alternative to traditional litigation in the region.

Please note that this event will be conducted in Spanish.

Cost(s): Attendance to this online event is free, however pre-registration is required.

CIArb is proud to collaborate with the following ADR institutions in the production of this event: 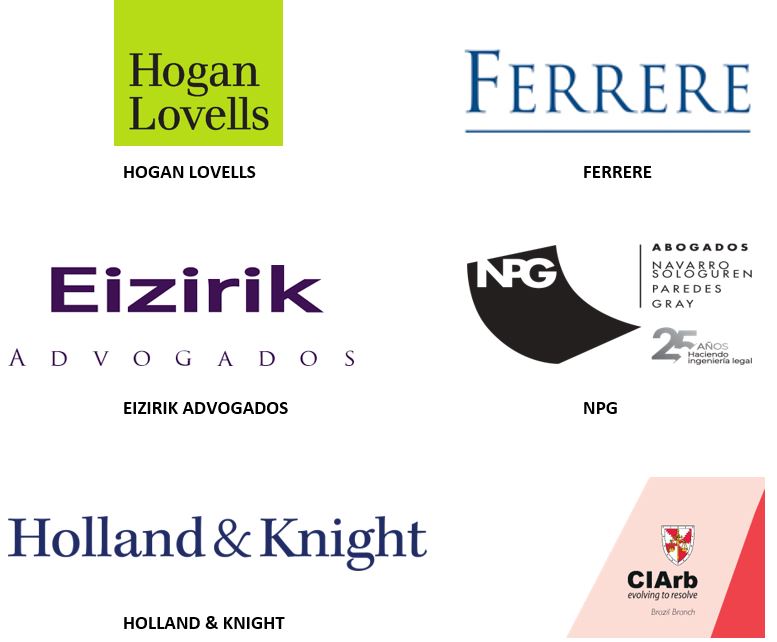 She is currently representing clients in construction arbitrations and disputes related to public interest services concessions, a multinational company in litigation on matters of professional conduct, and different investors in various international disputes against the Uruguayan State. For a number of years she has represented three major international financial groups – JPMorgan Chase, Credit Suisse and Commerzbank - in a series of litigations deriving from liquidation of Uruguay’s largest private bank. These cases involve actions in Argentina and the United States, and González coordinates on them with other international firms.

Sandra González is alternate member for Uruguay of the Court of Arbitration of the International Chamber of Commerce, and regularly participates as a panelist on arbitration and foreign investment issues at international conferences.

Master in Business Law from the Peruvian University of Applied Sciences.

Professor at the Faculty of Law and Graduate Schools of the Peruvian University of Applied Sciences and Universidad del Pacífico in the Construction Law Specialization Programs.

He has nearly 25 years of experience in conflict management in the engineering and construction sector.

Sha has a PhD in corporate law (USP) and a Master of Law in international law (UERJ).

She is the co-chair of the CCI Brasil task force regarding arbitration and energy law.

Ana is admitted to the bars of Brazil and Portugal and is registered with the Paris Bar (Directive 98/5/EC). She obtained a PhD in law and an LL.M in international law from the University of Cambridge. She also lectured at the University of Paris-XIII in 2017.

Mr. Zuleta has more than two decades of dispute resolution experience, including proceedings before Colombian courts at all levels. His extensive record of accomplishment in arbitration includes domestic and cross-border proceedings under the rules of the International Chamber of Commerce (ICC), United Nations Commission on International Trade Law (UNCITRAL), International Center for Dispute Resolution (ICDR) and the different arbitration centers in Colombia.

In addition, Mr. Zuleta handles antitrust investigations and litigation proceedings before the Superintendence of Industry and Commerce (SIC), matters regarding unfair trade practices and premerger reviews.

Prior to joining Holland & Knight, Mr. Zuleta served as the head of a major Colombian firm's litigation and arbitration department.

She regularly advises on arbitration matters (under ICC, ICSID, ICDR and other rules), and international procedural law including matters of jurisdiction, arbitration clauses, and recognition of foreign awards and judgments. She also regularly advises on investment disputes and on alternatives for structuring foreign investments under different BITs signed by Uruguay.

She has represented clients in important construction, energy and corporate disputes, both in arbitration and litigation.

Her recent experience includes advice to the main contractor for a combined cycle power plant in ICC and judicial proceedings and to the main contractor for a pulp plant in an ICC proceeding against the project’s owner. She has also acted as counsel in expropriation disputes, injunctions, actions for access to public information and provisional remedies, as well as in trademark and antitrust actions (such as the dispute over rebroadcast rights for the 2010 World Cup of Soccer in South Africa, and the conflict on free competition in telecommunications at the country’s main airport).

She has broad experience in bank-related disputes. Since 2005 she has been a member of the team defending international financial institutions in over 50 claims and two ICC arbitrations arising out of the 2002 banking crisis in Uruguay, for an amount in excess of 1.6 billion dollars. She also successfully represented banks in client claims deriving from the Bernard Madoff fraud and from the 2008 financial crisis.

She is the author of the book “Remedios contra la fusión: Impugnacion y resarcimiento” (Remedies in merger contexts: challenges and action damages) published by Thomson Reuters, Civitas, in Madrid in 2015. She has also published numerous articles in Uruguay and abroad on procedural law, arbitration, international commercial litigation and bankruptcy. She wrote the “Evidence” Section of the Commentary on the National Procedural Code on which she worked with Professors Santiago Garderes and Gabriel Valentín (published by La Ley, Thomson Reuters, 2012).

In 2012 she was a Research Associate at Queen Mary University of London (Centre for Commercial Law Studies). In 2013 she was awarded a doctoral scholarship by The Hague Academy of International Law. In 2010 and 2011 she was awarded the Giner de los Ríos scholarship for Visiting Professors at Universidad de Alcalá (Madrid). In 2012, she was also granted a scholarship from the Spanish Ministry of Education and Science to teach a seminar for LLM students. Since is Adjunct Professor in Procedural Law at Universidad de la República (Uruguay).

Orlando F. Cabrera C. counsels international arbitration clients seamlessly across borders and languages at Hogan Lovells.  He is a Fellow of the Chartered Institute of Arbitrators (CIArb) and Board Secretary of CIArb’s North American Branch (NAB), a listed arbitrator by the Arbitration Center of the Lima Chamber of Commerce and the International Center for Conciliation and Arbitration, an associate at the Madrid Court of Arbitration, and Young ICCA Events Coordinator. Orlando draws on his deep understanding of complex domestic and international disputes to effectively represent clients in ICSID, ICC, LCIA, and UNCITRAL arbitrations throughout Latin America, North America, and Europe. He studied law in Canada, Mexico, and the United States; he speaks fluently Spanish, English, French and Portuguese.

Get in touch for Sponsorship Opportunities