A note on the events in the Suez Canal

On 23 March 2021, the container ship Ever Given ran aground on the banks of the Suez Canal, effectively blocking of the waterway for both northbound and southbound traffic. The Ever Given, a 224,000-ton ship sailing under Panamanian flag, became wedged after falling victim to harsh winds and poor visibility. Local authorities have been at the seen since the event initially occurred, attempting to re-float the vessel. As of Thursday evening, London-time, however, unsuccessfully.

Legal Exposure
Ever Given’s current situation gives rise to a set of legal questions. Her position – almost perpendicular to the channel – means that all ships in the current convoy, both southbound and northbound, are stuck. This likely means delays in the range of several day up to several weeks. In turn, this means that cargo will be arriving late to their final destinations and that ships transiting the canal in ballast might end up missing their paydays and cancelling their next employment.

Broken Charter Claims
The delays caused could, according to Karina Albers, potentially lead to charter party claims pitting the ship owner – Japan-based Shoei Kisen Kaisha – against her operator – Evergreen Marine – and the charterers – the party bearing the risk for the cargo – against the ship owners. The interparty relationship is illustrated in figure 1. 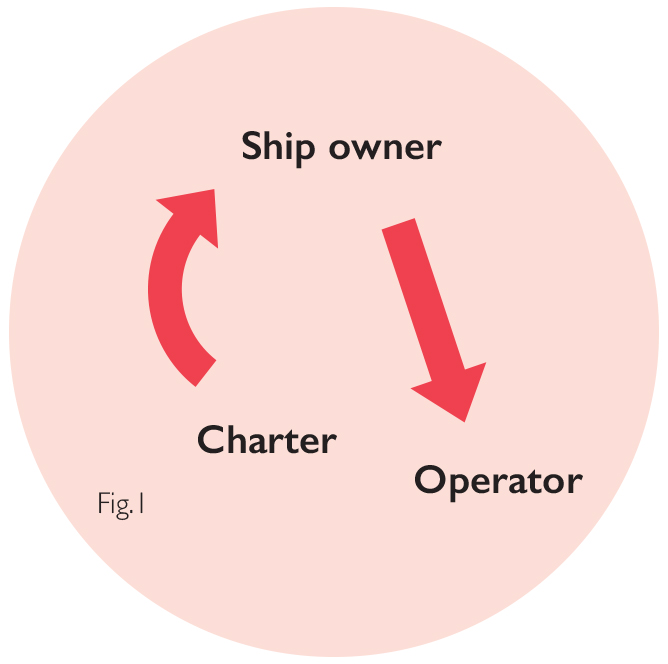 Additionally, if charterers do not manage to present to vessel to the shippers or cargo owners in an agreeably timely fashion the latter may not find an alternative vessel available due to a strong market for dry bulk carriers. According to Ms. Albers, events like these could accumulate and generate substantial claims from shippers to charterers, from charterers to owners, and from owners to operators – like Evergreen Marine.

Overrun and Additional Costs Claims
Another potential consequence, increasingly likely to occur the longer the canal remains unpassable, is other convoys diverting in order to avoid the passage altogether. Such diversions would most likely be via the Cape of Good Hope, something that would incur additional costs for bunkers and subsequent delays. For vessels waiting at Port Said to transit southbound through the Suez Canal, finding alternative routes would mean going around via Gibraltar and the Cape of Good Hope towards India, the Middle East, and the Gulf States. This would add approximately three weeks to the respective vessel’s journey.

The situation, however, extends beyond the canal itself. “Vessels that have not yet entered the Mediterranean Sea might opt to go via the Cape if the Ever Given will be stuck for more than week in the Suez Canal”, according to Karina Albers.

She continues, “[t]he same applies to vessels heading northbound from the East. As long as they have not entered the Gulf of Aden, they might sail via the Cape of Good Hope which creates a delay of two weeks or more. All those delays create additional charter hire payments and bunker consumption for which the charterers will raise individual claims against Evergreen.”

Settlement of Insurance Disputes and Other Related Matters
Another point of concern raised in relation to the current situation in the Suez Canal is that of insurance claims. Sources quoted on Wednesday, 24 March 2021, argued that the owner and insurer of the Ever Given at that time faced claims in the millions of USD.

The vessel’s owner and insurers primarily faces claims from the Suez Canal Authority for loss of revenue and from stakeholders whose shipments has been disrupted due to their vessels being forced either to reroute or to a standstill. In addition, owners of the cargo on board the ship will likely aim claims towards the ship’s liability insurer for losses to perishable goods or missed delivery deadlines. It is at this time not clear whether or not the Ever Given’s owner will seek to contest any claims made towards them and their insurer.

Normally, disputed maritime insurance claims can be approached slightly differently depending on the geographical location where the incident in question took place. In this case – with the location being the Suez Canal – pro forma solutions should be close at hand for the parties.

This particular event has an extra layer of complexity as it involves multiple claimants, out of which not all are presumed to be bound by an underlying contract spelling out the to-be parties’ preferred method of dispute resolution. Usually, such a relationship incur reference to a set form arbitration – or other forms of alternative dispute resolution – in the charterparty. The parties are bound by this clause unless they expressly agree to solve the matter through another method.

In the case that disputes relating to the situation at hand do go forward, the most likely first step towards resolution is through neutral evaluation, mediation, arbitration, or – if all else fails – litigation. In deciding on the most appropriate form and forum for settling any arising disputes, it is left up to the parties’ discretion to do so in those cases where it is not already pre-determined through a bilateral agreement.

Given the number of affected parties, the large value claims, and the underlying urgency, however, it is reasonable to expect all parties involved to seek out the most expediate and less costly solution.