The Key Players in International Arbitral Proceedings: Roles and Evolution

On the 12 April 2019, the CIArb in partnership with the LL.M Business Law, Arab World and Middle East of Université Paris 1 Panthéon-Sorbonne held an event entitled: “The Key Players in International Arbitral Proceedings: Roles and Evolution”

‘The speakers were as follows: 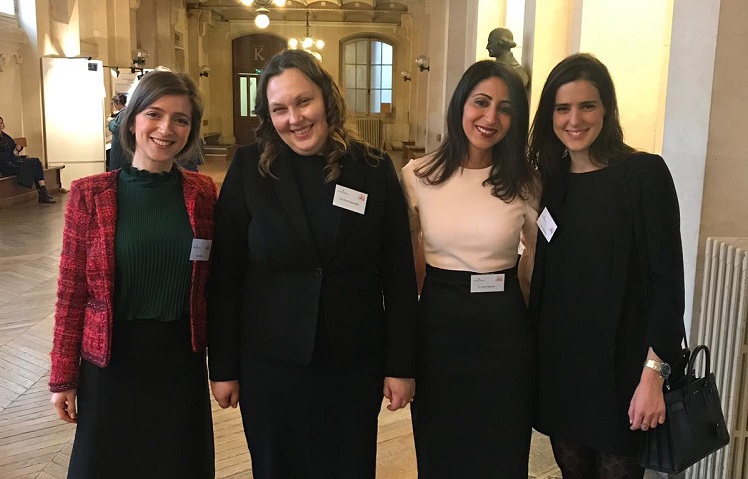 Iolanda Ghica, Head of Marketing at CIArb introduced the Chartered Institute of Arbitrators as the world’s leading qualifications and professional body for dispute avoidance, management and resolution. CIArb has 16 000 members across 133 countries supported by an international network of 39 branches.

Then, she introduced the speakers, each of whom represented one of the key players in international arbitral proceedings: arbitrators, administrative secretaries, arbitral institutions and counsel. Emphasis was on their changing roles and the international mindset and global diverse perspective the lecturers brought to the discussions.

The Head of the LLM programme Professor François Ameli made a presentation on “The arbitrator’s perspective in conducting international arbitral proceedings, with specific reference to the Arab World and Middle East”. 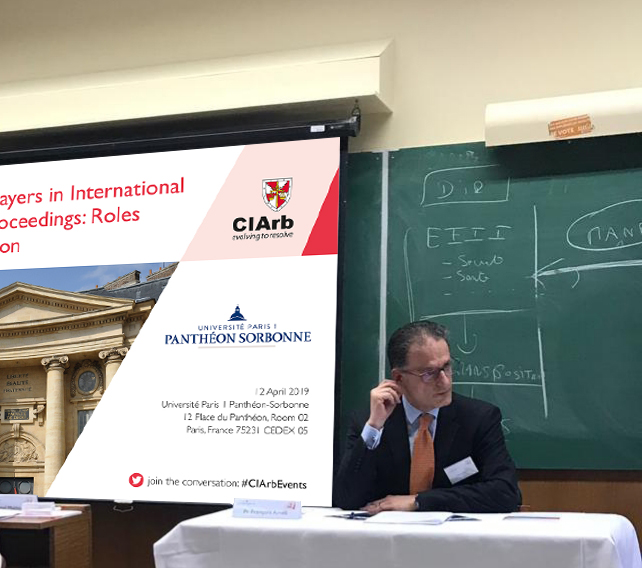 He mentioned the change in the arbitrator’s role in the recent past in the Arab world. Their role is moving from more mediation towards professional arbitration due to the sophistication of the cases and the need for impartiality. The development of certain boutique law firms can be one factor contributing. Because these are specializing in arbitration, pushing arbitrators to be more and more professional.

In the Middle East, there is a long-standing Persian tradition of arbitration. Now, as the development of regional arbitration centres such as Dubai and Cairo shows, the Arab world is also shifting towards arbitration. Due to the current sanctions imposed on Iran, activity at the centre in Tehran is now somewhat suppressed.

Professor Ameli did also not shy away of mentioning some shortcomings and risks to arbitration in the Middle East. There is for example a recent case (from a lower court, still under appeal) where arbitrators were sentenced to prison and high indemnities for having shifted the arbitration to a neutral country with ad-hoc proceedings.

Professor Ameli did also not shy away of mentioning some shortcomings and risks to arbitration in the Middle East. There is for example a recent case (from a lower court, still under appeal) where arbitrators were sentenced to prison and high indemnities for having shifted the arbitration to a neutral country with ad-hoc proceedings.

To conclude his presentation, Professor Ameli also encouraged arbitrators to reflect, before rendering their award, on how feasible the enforcement of the award will be in the relevant countries.

‘Then, Dr. Amel Makhlouf took over to explain the controversial and evolving role of administrative secretaries to arbitral tribunals. She made the case for their role, acknowledging the professionalization and complexity of arbitration, based on the following points:

Logistics: why would the arbitrators necessarily have to take care of this aspect on their own?

Optimization of resources: she made a parallel with the collaboration between judges and clerks.

“Paper tsunami”: it may be impossible for one person to handle the number of documents involved.

Availability: the secretary can, for example, be contacted by the arbitral institution even while the arbitrator is travelling.

She also talked about some objections regarding administrative secretaries:

Perceived lack of legitimacy: However, the administrative secretary gets her/his role from the relationship with the chairman or sole arbitrator. Also, impartiality requirements/no conflict of interest apply.

The fact of involving another 3rd party and perceived risk on confidentiality.

“Acting as fourth arbitrator”: under no circumstances should the administrative secretary take part in the decision-making process.

What is the process for getting an administrative secretary onboard?

Usually the initiative comes from the chairman.

Agreement is then sought from the co-arbitrators.

The subject is raised during the case management meeting. It is mentioned in the meeting report (including certain procedural aspects like confidentiality) for which non-objection of the disputing parties is sought. It was noted that the parties rarely refuse the administrative secretary in order not to go against the wish of the chairman of the tribunal.

The treatment of the costs of administrative secretary’s performance depends on the applicable arbitration rules.

There have been challenges to arbitral awards based on the role of the administrative secretary. However, state courts have been reluctant to set aside the award on this basis.

Representing the Chartered Institute of Arbitrators Olena Gulyanytska, FCIArb, delivered a presentation on “The role and evolution of the CIArb’s Dispute Appointment Service in arbitral proceedings’.

As the third speaker, Ms Olena Gulyanytska explained the role and evolution of the CIArb’s Dispute Appointment Service (DAS). It was created in 2012 and quickly gained traction, both domestically and internationally. DAS has access to an immense pool of qualified and experienced professionals, drawing from CIArb’s 16,000 members.

CIArb can appoint arbitrators but does not administer the arbitration itself. The tribunal can proceed on an ad hoc basis without additional charges and interference from CIArb. It will only serve as back-up in case of challenges, e.g. concerning impartiality. The presidential panel of arbitrators ensures the quality as the listed need to be chartered arbitrators, with reassessment every three years.

CIArb’s Rules 2015 are based on UNCITRAL rules with some additions:

Waiver of the parties right of appeal;

Ms Olena Gulyanytska also explained the Business Arbitration Scheme (BAS). The BAS Scheme has an objective to provide simple, cost-effective and timely resolution of disputes of low to medium monetary value (£5000 – £100,000 GBP) by a sole arbitrator. A final, legally binding decision on the dispute will be provided within 90 days from the appointment of the arbitrator. Some other characteristics are as follows:

A fixed fee of 1,250 GBP (if no hearing/site-visit is require) + VAT is payable by each party to cover DAS’ costs and the arbitrator’s fees.

A sole arbitrator will be appointed by CIArb within 10 days.

The parties’ case and witness statements shall not exceed 5,000 words.

The successful party may not recover more than its fixed fee plus £1,000 GBP towards their costs of arbitration.

The above framework gives visibility on costs (remaining low), providing speed and simplicity (parties can even proceed without legal representation). All this with confidentiality and obtaining an award with the same enforceability as a court judgement.

Finally, Ms. Hanna Abdou delivered a talk on “The conduct of counsel in the International arbitration”. She pointed out that the counsel’s role is very broad. She would therefore focus on some specific points.

Who can be that counsel?

A lawyer representing the party;

An expert (sometimes a technical expert) when acting as party’s representative;

In house counsel of a company.

Their mission starts with the request for arbitration, at least for the defendant. For the claimant, the interaction usually starts some weeks or months before. This period is used to establish the relationship, understand the claim and prepare suitable documents. When the parties choose the arbitrators (instead of relying on an arbitral institution or a nominating body like CIArb), the counsel also has an important role to advice on potential arbitrators. Counsel will also be strongly involved in the case management and the setting of the procedural timetable. The counsel’s role doesn’t end with the hearing because support is probably needed for:

Providing a statement of costs and fees.

Analyzing the award and explaining it to the Client.

Potentially filing for annulment of the arbitral award or launching the steps to enforce the award.’

The event was swiftly followed by a heavily-populated networking session in the famous and architecturally breath-taking Hall St Jacques of the Université Paris 1 Panthéon-Sorbonne. The diverse and engaged delegates continued to share their responses and reactions to the topics long after the allotted time and were eventually asked to continue their discussions away from the niversity by the already accommodating staff.

A noteworthy and grateful mention is offered to our excellent event sponsors, CKR Law, who provided the champagne and canapes which were well received by the attendees.  The evening provided an excellent example of collaboration between the two institutions and it is hoped that this and similar initiatives will be run again.

More photos from the event will be available here.