The Honourable Ms. Teresa Cheng GBS SC JP, Secretary for Justice of the Hong Kong Special Administrative Region of the People’s Republic of China delivered the Chartered Institute of Arbitrators’ prestigious annual Alexander Lecture on 16 January 2020 in Hong Kong. The lecture was attended by senior practitioners, academics and government officials.

It was apt that Ms Cheng should be the first woman to deliver the Alexander Lecture, as she is also the first Asian woman to have been elected as President of CIArb (in 2008).

For this, the CIArb’s 45th Alexander Lecture, Ms Cheng’s topic was ''The Search for Order within Chaos in the Evolution of ISDS”. CIArb has been looking at how ISDS should be developed under the concept of evolution, rather than revolution and it was against this backdrop, that Ms Cheng enlightened the audience on her thoughts for how to decipher some order in the current chaotic picture of ISDS reform. As a member of the International Centre for Settlement of Investment Disputes (ICSID) Panel of Arbitrators, and a former member of the World Bank's Sanctions Board, Ms Cheng has a great deal of previous experience with the subject matter of the lecture.

Ms Cheng started by reflecting on the history of ISDS and the essential nature of investment arbitration. She identified three major concerns and criticisms over ISDS, those being (1) the perceived inconsistencies in ISDS awards; (2) impartiality and diversity of arbitrators; and (3) excessive cost and duration. 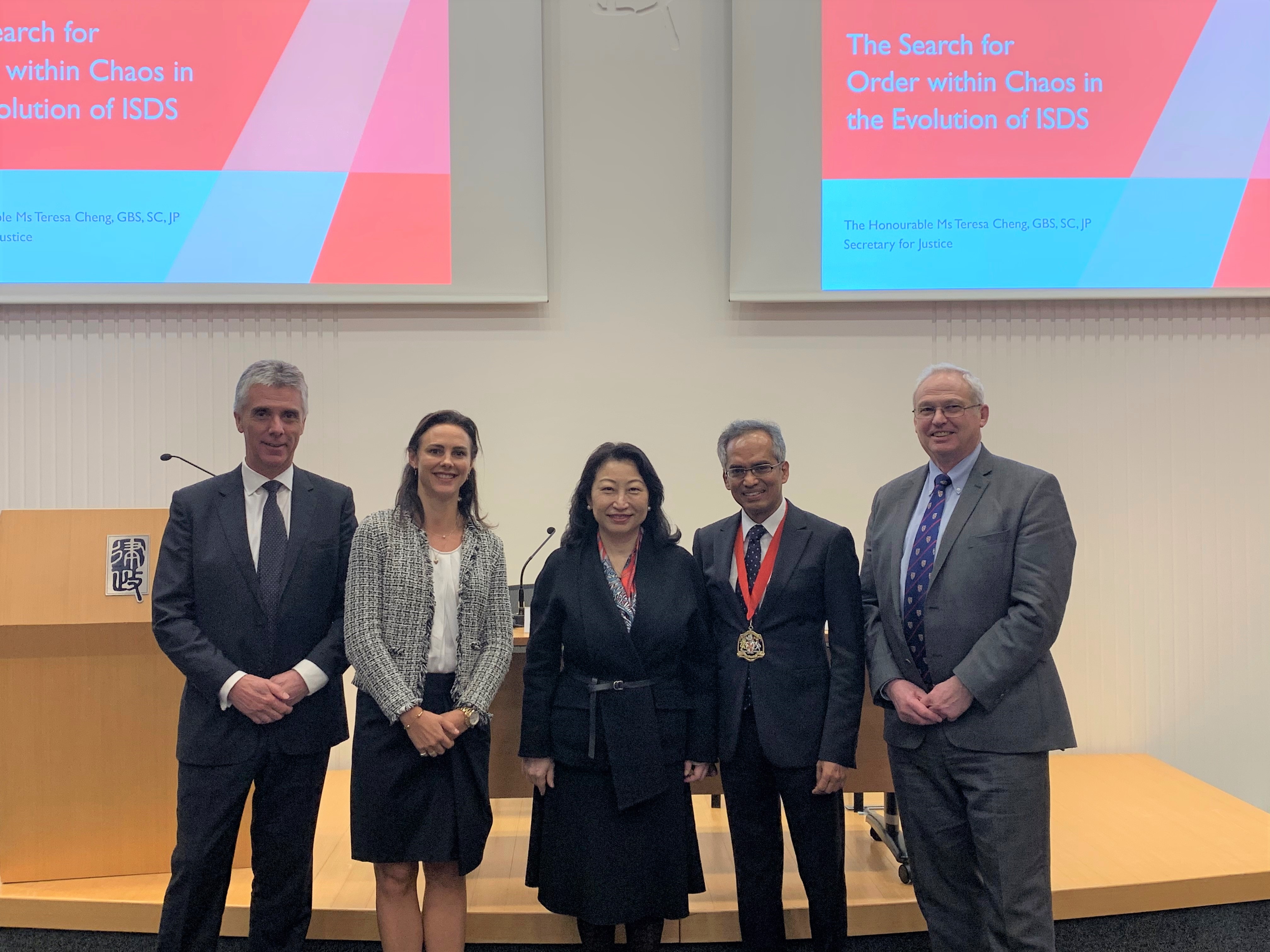 Ms Cheng continued the voyage in the sea of “chaos” in the Evolution of ISDS, as reflected not just in the diverse approaches taken by states with respect to their investment treaty practices but also fierce debates going on in the international community, including in particular the working sessions of UNCITRAL Working Group III, over the nature of the reform needed for the ISDS regime.

In response to this chaos, Ms Cheng centered her lecture around her proposal for a novel “Double-Helix” approach to restore confidence in ISDS and address the current legitimacy crisis (whilst preserving the essential attributes of ISDS which, in Ms Cheng’s view make such mechanism work in the first place).

1. Centralised or Decentralised? Ms Cheng posited a centralised standalone appellate mechanism based on a multilateral treaty, instead of appeals conducted by bilateral appellate mechanisms formed under individual BITs or domestic courts (which would most likely further aggravate the inconsistencies in ISDS awards as a result of the different approaches and different standards of review adopted in the appellate procedures).
2. Scope: limited to an error of law but not an error of fact? Ms Cheng referenced section 69 of the UK Arbitration Act 1996, which provides for a limited right of appeal on a point of law, as a possible model for the ISDS appellate mechanism. Ms Cheng has also mentioned that the Arbitration Ordinance (Cap. 609 of the Laws of Hong Kong) contains a similar opt-in scheme for making an appeal against arbitral awards on questions of law. In the context of the UK Arbitration Act 1996, the English courts have been strict in rejecting attempts to dress up erroneous factual findings or procedural errors as an error of law. The World Trade Organization (WTO) Appellate Body has taken a similar approach. Ms Cheng proposed that an ISDS Appellate Mechanism would also have a very high threshold under which an egregious error of fact can constitute an error of law.
3. Appeal as of Right or with Leave? Again, Ms Cheng suggested modelling section 69 of the UK Arbitration Act 1996 and requiring the applicant to obtain leave to appeal to a standalone ISDS appellate mechanism to filter out frivolous appeal applications.
4. Enforcement of Awards made by the ISDS Appellate Mechanism: whilst pointing out that enforcement is a complex issue, Ms Cheng considered that a more practical option would be to find ways to allow the awards made by the ISDS appellate mechanism to be enforceable under the ICSID Convention and New York Convention (and at the same time also noted that it is open to the multilateral treaty  for a new centralized appellate body to provide for its own enforcement mechanism).

The second strand of Ms Cheng’s “Double Helix” approach involves promoting the use of Investment Mediation to give ISDS a new life and new look. In Ms Cheng’s view, investment mediation offers some unique benefits, including preserving long term relationships, and can avoid creating arbitral awards that can be seen by some as politically unacceptable or intrusion into the regulatory sovereignty of host jurisdictions. Ms Cheng drew the audience’s attention to the innovation in the Investment Agreement under the framework of the Closer Economic Partnership Arrangement (“CEPA”) concluded between Mainland China and Hong Kong. The CEPA Investment Agreement contains provisions such as fair and equitable treatment and prohibition against illegal expropriation that are commonly found in modern international investment agreements. Investment mediation is the only available detailed mechanism for resolving disputes under the CEPA Investment Agreement. Further, the CEPA Hong Kong Investment Mediation Rules set out a basic framework for the disputing parties to conduct their mediation. Ms Cheng submitted that such Investment Mediation Rules can serve as a template protocol for incorporation into international investment agreements or even for structuring a multi-tiered dispute resolution process such as “mediation first, arbitration next”.

The lecture was concluded with a lively round of questions covering some of the more controversial aspects of putting together an ISDS appellate mechanism (or a multilateral investment court), such as where to draw the pool of arbitrators/ judges from and how they would be paid. 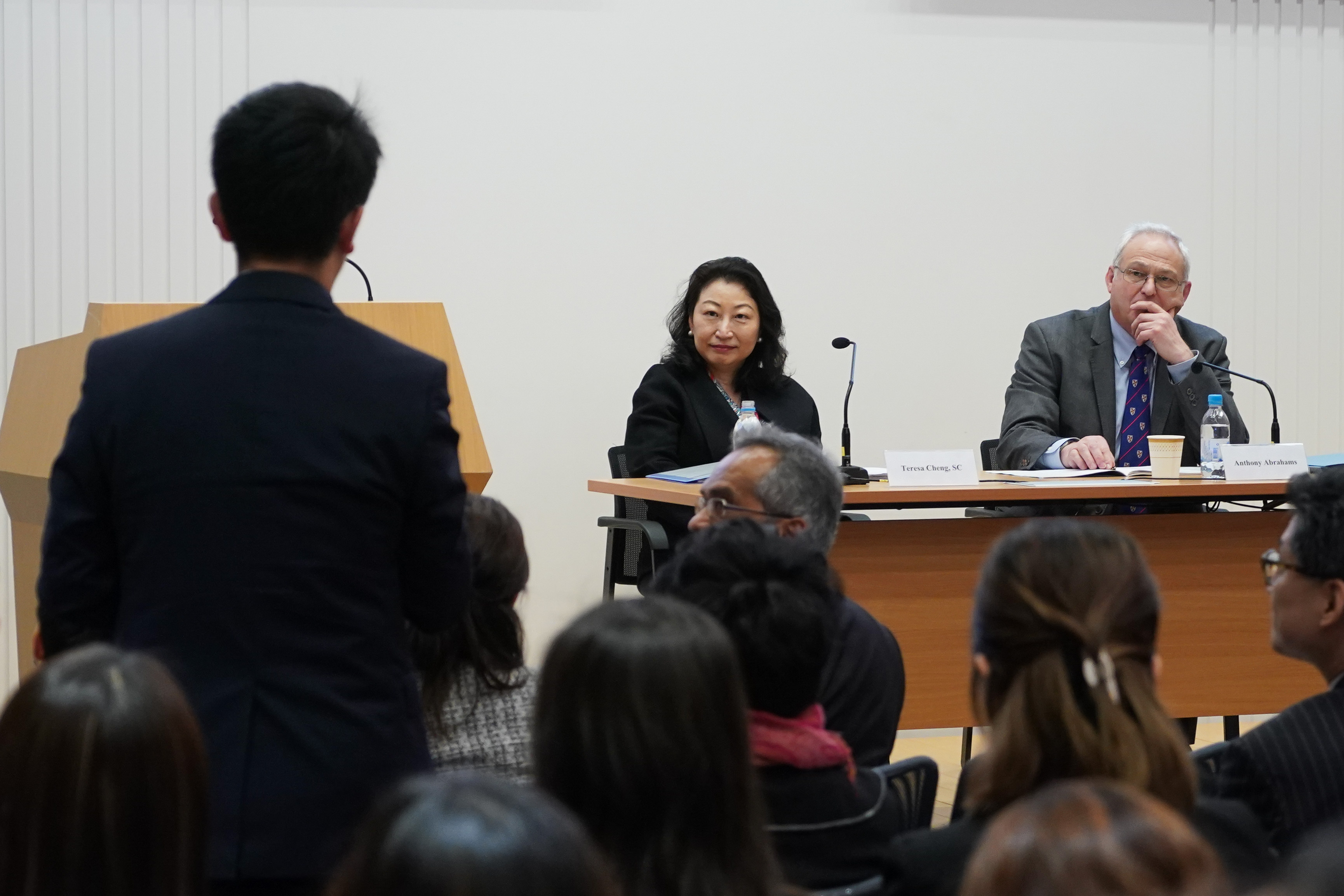 Ms Cheng captivated her audience with her hypothesis for injecting order into the debate over ISDS reform. She concluded her lecture with a Chinese saying “in every crisis, there lies an opportunity”. Ms Cheng’s articulate proposal left her audience aspirational that if all stakeholders collaborate efforts to capitalize on the strength of investment mediation, while exploring the use of a well-balanced appellate mechanism, then there is an opportunity to achieve a higher standard of legitimacy for ISDS.

Ms Cheng’s “Double Helix” approach set out a balanced vision on the way forward for the reform of ISDS, one that covers both structural and non-structural reform options. Such an approach also complements CIArb’s balanced, iterative approach to ISDS reform as articulated in our 2019 discussion series “Evolution not revolution: CIArb sets out its approach to the question of ISDS reform”. For example, with respect to the second strand of the “Double Helix”, Ms Cheng’s suggestion of "mediation first, arbitration next" echoes CIArb’s proposal that mandating disputing parties to attempt mediation before filing a claim could bolster the legitimacy of ISDS by improving efficiency in the system and preserving the long-term relationships between foreign investors and host States. CIArb shares Ms Cheng’s vision of bringing clarity to the ISDS debate such that a stronger, reformed system emerges through a process of healthy evolution, and her lecture is a valuable contribution to that process.

Ms Cheng said, "It is my great honour to be invited by CIArb in March last year as the first woman to deliver the prestigious Alexander Lecture. Regrettably, the original event had to be postponed due to the assault and the injury I sustained on my way to the event venue in London. I am very thankful to the CIArb for its time and effort to rearrange the event in Hong Kong. I hope that the perspectives in the lecture can contribute to the international discussion on the way forward for ISDS reform."

About the Alexander Lecture

The Alexander Lecture was founded in recognition of the contribution of Mr John Russell Willis Alexander (1897 - 1985) to the Chartered Institute of Arbitrators. He served for 40 years as a member of Council and was elected President of the Institute of Arbitrators, as it was named at the time, for the period 1952 - 1955. This meeting is considered one of the most respected events in the Alternative Dispute Resolution (ADR) calendar.

Anthony Abrahams MCIArb TD DL MBA, CIArb's Director General: "The Alexander Lecture has a tradition in developing the thoughts and approach to dispute resolution and this flagship event is recognised as the leader in this respect. The 2019 lecture lived up to the high standards set previously. That it was delivered by a Past President [the honourable Teresa Cheng] was a delight; that she was the first female to deliver the lecture was also something that CIArb is proud of, whilst acknowledging that this was long overdue. I am grateful to Teresa Cheng and her staff for making this event successful."

Justin D’Agostino, Executive Partner and CEO Elect, Herbert Smith Freehills: "This was the first Alexander Lecture given by a woman and the first to be held in Hong Kong, so it was a notable and valuable event for the arbitration community in this region. The Secretary for Justice gave us much food for thought about how to resolve some of what she called the "chaos" that currently exists in the ISDS world. I think the subtitle for the lecture could have been "Mediation first, Arbitration second and then Appeal" (with leave) if necessary. Over the past decade, I have seen the rise of mediation in Asia and the growing debate around its attractiveness, or not, to both States and corporate parties. The Secretary has given us much to consider through her proposals for this region. It would be exciting to see Hong Kong and the Hong Kong government take a lead in furthering this debate. The Secretary also addressed the very hot topic of ISDS appeals. It's something that has been talked about for many years, including whether States and investors would welcome, in exceptional cases, the ability to go to a higher body, especially as there is often so much at stake both politically and economically and in the ongoing relationship between the investor and the host State. The Secretary challenged us to re-consider the balance between finality on one hand and perfection on the other, and whether that balance is to be struck more in favour of the latter in investment treaty disputes. Thank you very much to CIArb for arranging an excellent event."

Matthew Gearing QC FCIArb, Allen & Overy: “The Secretary for Justice, Teresa Cheng SC, notched up two notable firsts when delivering the 45th Alexander Lecture for CIArb. Firstly, she was the first woman at the 45th attempt to give the lecture. Second, this was the first time the lecture had been delivered outside of London. Teresa Cheng outlined a bold vision for the development of ISDS, and in particular by setting out a vision for a coherent and overarching appellate mechanism.”

Teresa Cheng, GBS, SC, JP, is the Secretary for Justice of the Hong Kong Special Administrative Region of the People’s Republic of China. Prior to her appointment as the Secretary for Justice, she was a senior counsel in private practice, a chartered engineer, a chartered arbitrator and an accredited mediator. She was frequently engaged as arbitrator or counsel in complex international commercial or investment disputes.

Ms. Cheng is a Fellow of King's College in London and was the Course Director of the International Arbitration and Dispute Settlement Course at the Law School of Tsinghua University in Beijing. 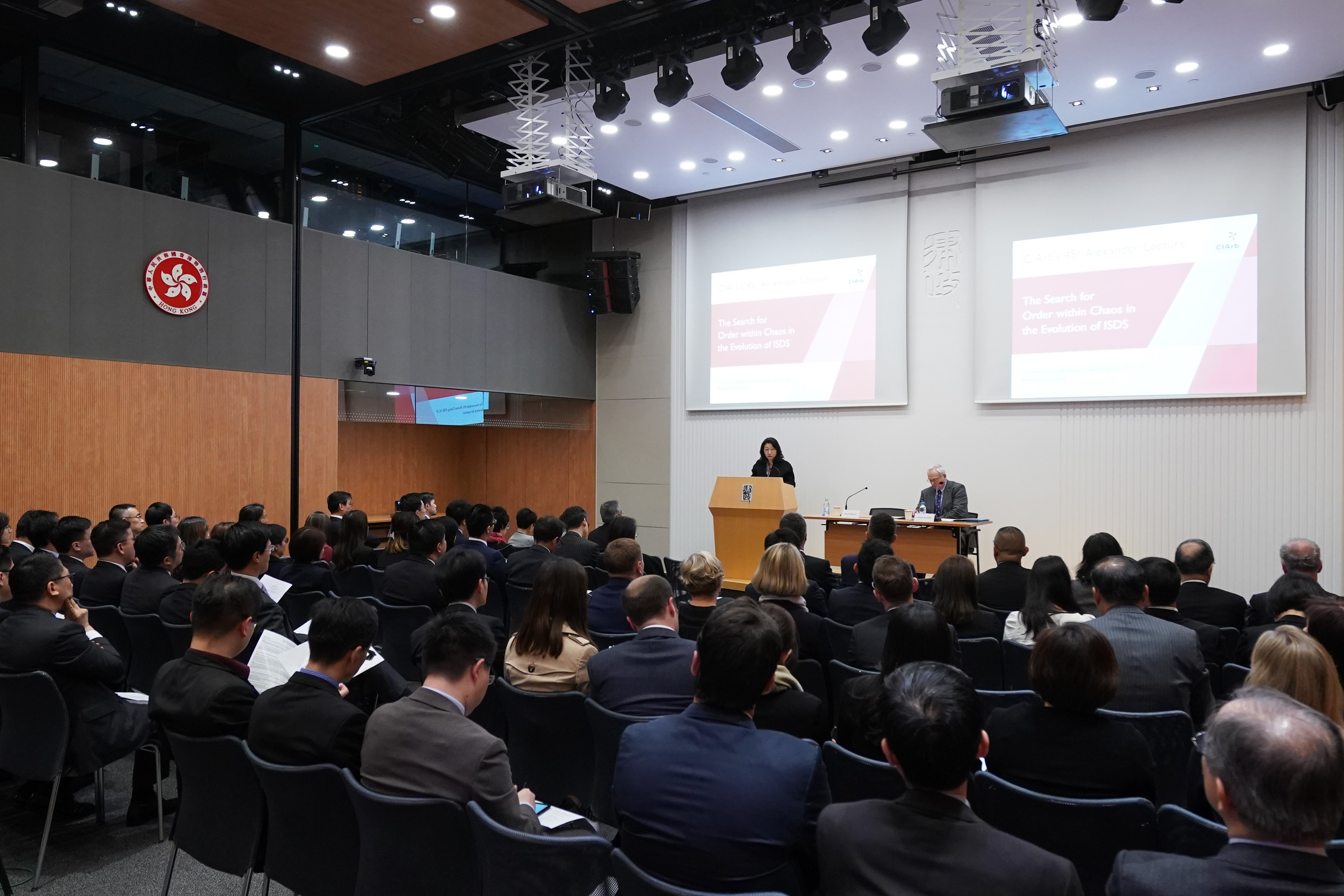