On 11 June 2020, one of the leading lights of our profession Cherie Blair CBE QC MCIArb delivered the 10th Roebuck Lecture entitled “Getting ahead of the curve: how arbitration can better meet the needs of people, parties and planet”.

There was a particular poignancy to this year’s lecture due to the passing of Professor Derek Roebuck MCIArb in April, and the event was a tribute to his life and the enduring legacy he has left behind, both to CIArb and to the wider world of arbitration. In that spirit, this was a truly pioneering year for the lecture as it was conducted entirely online and was open to the entire ADR community worldwide, free of charge.

Not only did this encapsulate the resourcefulness and ingenuity with which our profession has adapted to the current pandemic; it was also a tangible manifestation of the themes of adaptability, innovation and change addressed by Cherie in the lecture.

Adaptability in a crisis
Cherie was introduced by our new Director General Catherine Dixon who, drawing on her own recent experience circumnavigating the globe on a tandem, expressed her hope that this year's themes of sustainability and human rights may find fertile ground as the world pulls together in the face of the pandemic.

The lecture then began with an acknowledgment of how innovative this year's lecture has been, and a celebration of the incredible reach of the live stream to over 1,750 people around the world.

Cherie expressed her hope that out of the appalling tragedy of the pandemic, we might be able to extract the impetus for positive and lasting change. It was observed that as a result of the restrictions on movement resulting from various lockdown measures, international arbitration lawyers are now doing things that previously they had often only talked about doing, from utilising platforms such as Zoom to cooperating with partner organisations to find new ways of operating.

Crucially, these developments constitute not just pragmatic ways of dealing with a crisis – they actually embody constructive new ways of better meeting the needs of parties. In her remarks, Cherie Blair emphasized that “one of the great advantages of arbitration is the ability to respond to the needs of the parties”. If making greater use of technology enables practitioners to improve that responsiveness, then that can only be a good thing. Cherie also celebrated the work of various institutions in equipping the profession to make these adaptations. CIArb were singled out for particular praise for its ‘Guidance Note on Remote Proceedings’ on 8 April 2020, right at the start of the lockdown. The work of other bodies such as the ICC and SCC in providing practical help to adapt to COVID-19 was also noted as incredibly valuable.

In Cherie Blair’s view, the remarkable events of the past few months have taught us some profound lessons, including: That much professional travel is avoidable; many aspects of arbitration can be streamlined or expedited (from the use of remote hearings to documents-only processes); the value of collaboration in benefitting arbitration as a whole; that we can reduce costs for parties (and therefore address one of the main threats posed to the system); and the preferability of conciliation over a zero-sum battle over contractual terms. She urged the profession to apply and preserve these lessons for the long-term, long after the pandemic has passed. 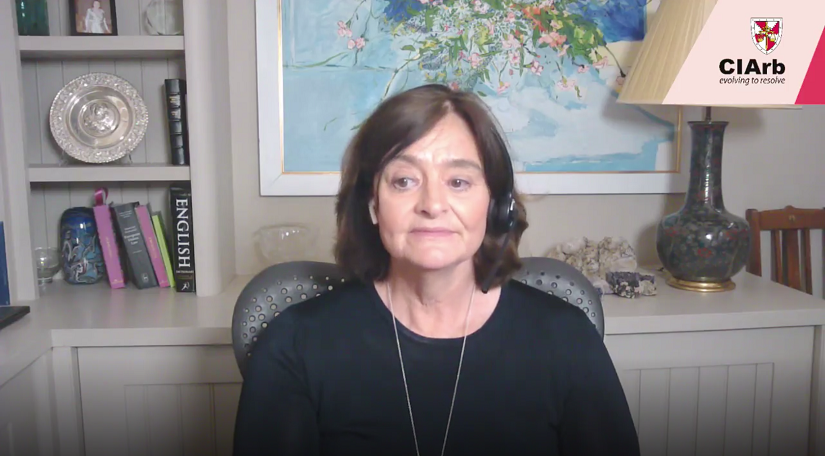 Human rights and sustainability
Next, the lecture moved on to the proliferation of values-based concerns throughout the commercial, policymaking and investing world. The acronym “ESG” (Environmental, Social and Governance) now ranks alongside traditional metrics like ROI and P&L in determining governmental and business decisions, and arbitrators need to embrace this if they are to remain relevant to their clients. This is vital not only because it is the virtuous or politic path, but because value-frameworks increasingly shape real-world decisions, and are becoming institutionally embedded in the regulatory landscape.

The 2006 UN-supported ‘Principles of Responsible Investment’, the UN Sustainable Development Goals (SDGs), and the UN ‘Guiding Principles on Business and Human Rights’ are all manifestations of this regulatory shift. More importantly, such guidance frameworks are increasingly being crystallised into ‘hard law’. For example, last year’s review of the UK Modern Slavery Act recommended that sanctions be made enforceable on firms that don’t comply, and in France, the Duty of Vigilance Law requires companies to not only map their environmental, health and safety and human rights risks but to develop a plan to address them. This has already led to litigation in the French courts.

Investor-State Dispute Settlement
The relevance of values-concerns and societal pressure to arbitration is starkly illustrated by the story of Investor-State Dispute Settlement (ISDS) over the last decade. In the eyes of many NGOs, legislators, and indeed much of the public, ISDS has become synonymous with an unfair system biased in favour of investors and corporations. As a result, many call for the system to be completely overhauled or even abolished altogether.

Cherie Blair argued strongly that ISDS plays a key role in underpinning the FDI that is so vital in facilitating growth, prosperity and the transfer of ideas, whilst also recognising the danger posed by a widespread notion that the system is somehow rigged. In remarks that echo our own call for ‘evolution, not revolution’ in ISDS, Cherie drew attention to the changes that are already underway to dispel this notion and called for States to make greater use of the mechanisms that have already been developed to protect their interests.

To illustrate the point, the ICSID case of Urbaser v. Argentina (2016) was cited. Here, the tribunal established the principle that as subjects of international law, corporations also have obligations under international law, and rejected the Claimant’s defence to Argentina’s counter claim that as a non-state actor it was not bound by human rights obligations. In Cherie’s view, this kind of evolution of the system in response to a changing world is not an anomaly – it is a key feature of the system of arbitration which is inherently adaptable and founded on reciprocity.

Recent cases have also shown that environmental factors could play an increasing role in ISDS counter-claims. The Burlington and Perenco cases brought against Ecuador both prompted environmental counter-claims that succeeded, with the State being awarded 41.5 million USD and 54.5 million USD respectively. Such examples may increase as states tighten regulatory regimes to meet their Paris Agreement obligations.

Before concluding her assessment of the current state of ISDS, Cherie highlighted the issue of exorbitant compensation claims, and the threat they pose to the perceived integrity of the system. Such claims potentially impose unbearable burdens on the finances and publics of poorer States. As such, Cherie urged tribunals to consider such claims carefully. She also drew attention to the tools available to tribunals to reduce damages on the grounds of the investors failure to mitigate losses (EDF v. Argentina), or “contributory fault” through “imprudent and negligent conduct” (Copper Mesa v. Ecuador and MTD v. Chile).

Human rights in commercial arbitration
Before concluding the lecture, Cherie Blair turned to the question of how these issues apply to commercial arbitration. She suggested that as corporate policies expand to encompass a wider range of responsibilities, parties will increasingly utilise such policies and clauses to bolster their case in a dispute scenario. There is a question over whether the duties of directors will be deemed to have widened as “the best interests of the company” are seen to include a commitment to upholding high ethical and environmental standards. The Hague Rules on Business and Human Rights Arbitration (launched on 12 December 2019) set out a framework to use arbitration as “a binding mechanism to resolve business and human rights disputes”. Cherie predicted that over time these Rules may become an integral part of the international arbitration toolkit.

Summary
CIArb President Francis Xavier SC C.Arb FCIArb summed up the lecture by thanking Mrs Blair for the insightful and thought-provoking ideas put forward in her lecture. During a series of original questions in subjects from the role of ESG concerns to the importance of diversity in arbitration, Cherie said that in her view CIArb is in a strong position to engage with such ‘hot-button’ issues given the expertise and international reach we can draw upon.

This was an incredibly stimulating – and indeed ground-breaking – event, and we were honoured to be joined by one of the most distinguished figures in arbitration.

The full lecture text and other available event resources are available here.