On 3 September 2020, CIArb hosted an online event offering attendees a unique opportunity to hear from the CIArb leaders and to put questions to them about CIArb’s role going forward.

At 11.30am, on the dot, Marion Smith QC FCIArb eloquently introduced herself and wished all in attendance a very warm welcome to the 'Meet the CIArb leaders' online event.

Marion continued on to rules and apologies, laying out the itinerary for the day’s webinar and subsequent networking session.

She introduced Jonathan Wood MCIArb, who continued down the introductory route by talking at length about getting his start as a legal professional in criminal law and eventual transition into dispute resolution, commercial law, and business. He particularly mentioned arbitration as his main foray into the world of ADR before handing the reins over to Catherine Dixon.

Catherine Dixon introduced herself and the organization, focusing on her career, education, military service, and extensive background as an executive.

Marion then turned the attendees’ attention towards in-house innovation and organization. Catherine set out to talk at length about the past 4 months’ work and touches upon CIArb’s three key strategic goals – global promotion, thought leadership and inclusiveness, and developing and supporting the global community of dispute resolvers. She further highlighted the importance of engaging business communities and governments in matters of ADR applicability as well as in the promotion of ADR’s procedural supremacy over litigation.

In the United Kingdom, Catherine added, existing CIArb schemes helping businesses through the pandemic has had good effect and could well be replicated worldwide. She goes on to mention the Institute’s laborious work in producing high-quality guidance notes on – inter alia – mediation, green initiatives, and adjudication. She also singled out the CIArb PolicyCast, intervening in cases with bearings on ADR, and thought leadership as specifically poignant means by which new development to the forefront of ADR could be brought about.

On the issue of equality, diversity, and inclusion, Catherine again affirmed CIArb’ commitment to these values and credited our position as a truly global organization for keeping them an integral part of CIArb. Asked about CIArb’s policy, Catherine responded by saying that CIArb continuously aims to promote the best candidates irrespective of background, aspire to develop a culture of inclusiveness, workshops for younger members, and especially younger women arbitrators, and promotes membership schemes and path to first appointment-programs. She also added that the opportunity for the CIArb to reward scholarships was on the agenda.

On the notion of policy, Catherine pressed the need for continuous progress and constant involvement of both members and personnel in order to stay on the cutting age of ADR development.

Marion then turned to Jonathan and spoke to his wide-ranging career and what trends he could decipher from the current crisis. He argued that the most interesting thing about how the pandemic has changed the practice is that it more than anything else raised awareness for tools of the trade that were already in use pre-pandemic. More so within arbitration than mediation, but he nevertheless stressed how the virtual tools that we rely on more than ever right now has indeed been around for a long time.

On the notion of the pandemic and the courts, he noted that the institutions themselves had all been rather quick too adapt and assist their users in the virtual environment. The UK Courts adapted especially well to proceeding with business-related cases, but sadly somewhat less well in dealing with other matters.

“Will this be the new normal?” asked Marion. Jonathan here irritated how the increased dependency on digital aids is, in fact, not new at all. It had up to this point simply been more widely accepted from an insider’s perspective than on a societal level. It is all part of a process of legal evolution in the way we conduct proceedings, Jonathan argued. He continued on to talk about how lectures and events online can in fact widen our audience and the reach of the institute’s influence and rate of engagement within the member base.

Jonathan then introduced Francis Xavier SC PBM C.Arb FCIArb, who went on to describe his experiences studying in Singapore as well as sharing details of his early life. He still practices in Singapore, but he talked about his works on cutting edge evolution of ADR practices from a global standpoint. 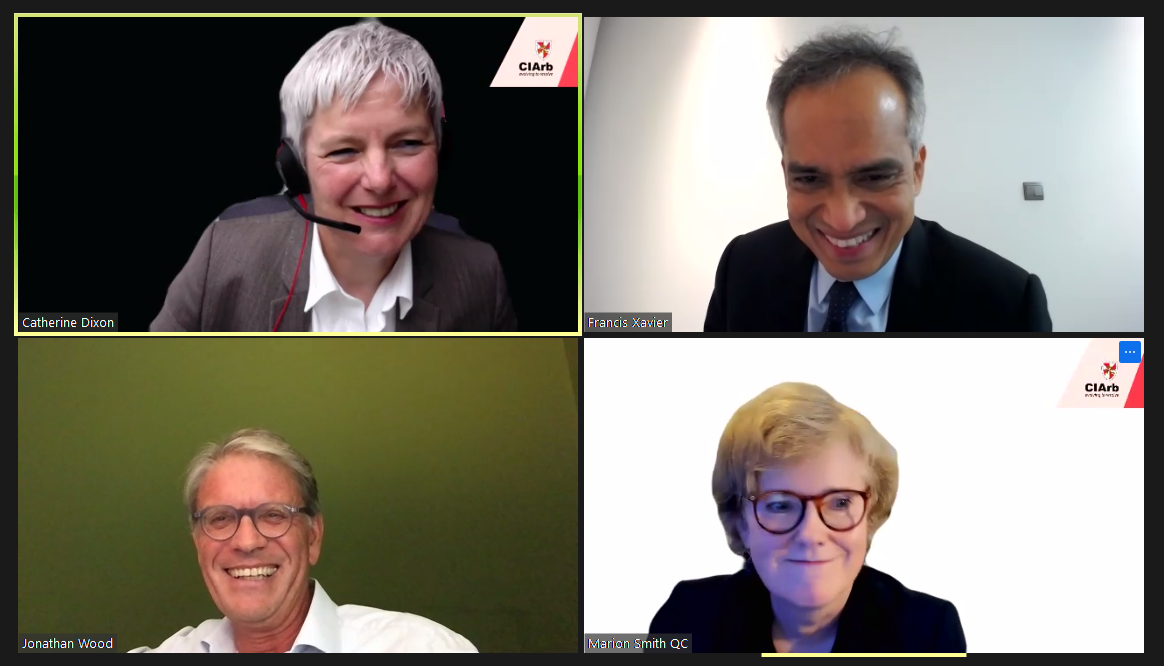 Marion then asked Francis what specific difference a membership in CIArb has had in his life, to which Francis answers by talking about how the access to courses and resources granted through his CIArb membership de facto taught him the academics of arbitration. He then zeroed in on the importance of the CIArb status and said that “with fellowship comes recognition, and with that comes the proverbial foot in the door of the arbitration community”. “CIArb is the perfect gateway to get to know the community. You get out what you put in”, he concluded.

Marion then asked what the other types of ADR methods, besides arbitration, might have to gain from membership, whereupon Francis admitted that the business had indeed ignored mediation for some time in favour of arbitration, but that the perks of CIArb membership for an aspiring mediator was the same as for any ADR-professional.

Asked how one best get started in ADR, Francis claimed the best way is to always focus on the long-term goal, to keep moving in the right direction, and to get the proper training and fellowship. “CIArb accreditation carries a lot of weight in this department”, he added. Francis also mentioned the value of taking initiative and being a catalyst of change. “Reaching out on your own accord to organisations and showing initiative is always a good route to take”, he argued.

Marion asked Francis how one could go about becoming a leader early on in an industry notoriously hard to break into, to which he ascertained that good leadership stems from behaviour, not position or status. “It all starts with you – and you have to take your own initiative in order to make a difference”, he concluded.

Following the closure of the introductory affair, Marion turned to the webinar’s Q&A section, reminding participants and audience members alike that all answers needed to be one sentence or shorter in length.

The first question went to Catherine and touched upon her reasons for joining CIArb. “Because it was a great opportunity at a great organisation with an excellent vision”, she replied.

Confronted with the same question, Jonathan argued that he joined CIArb to bring about change in the world of dispute resolution, one that at times might come across as a bit stuffy and stagnant indeed.

Francis agreed with his colleagues but added that CIArb gave him the training that he needed to succeed in areas where he otherwise would not have been able to. 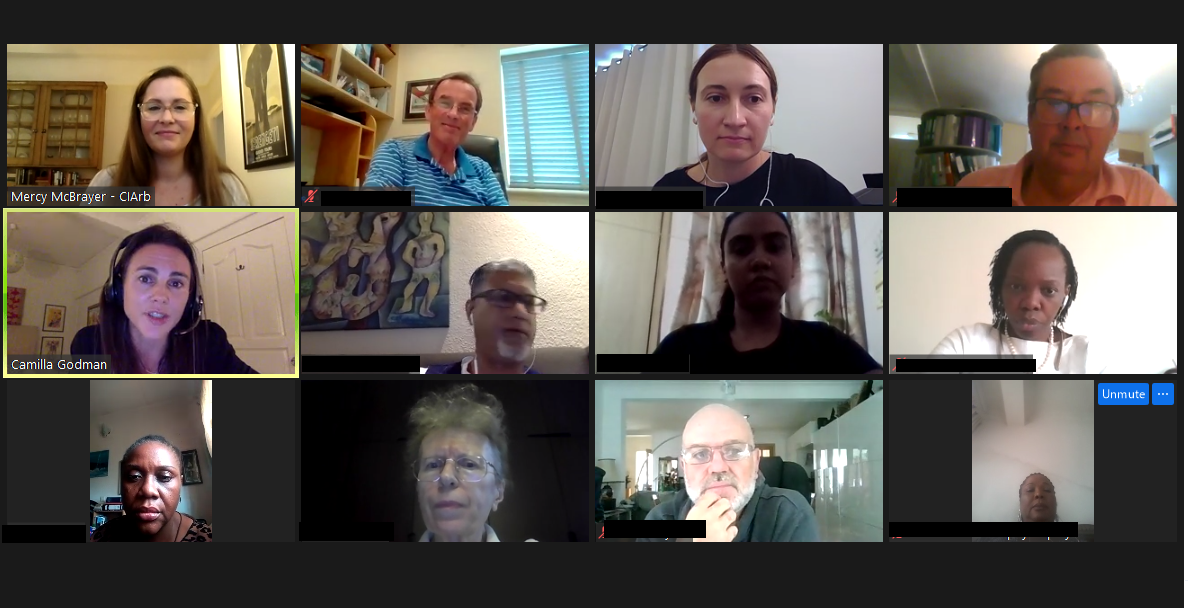 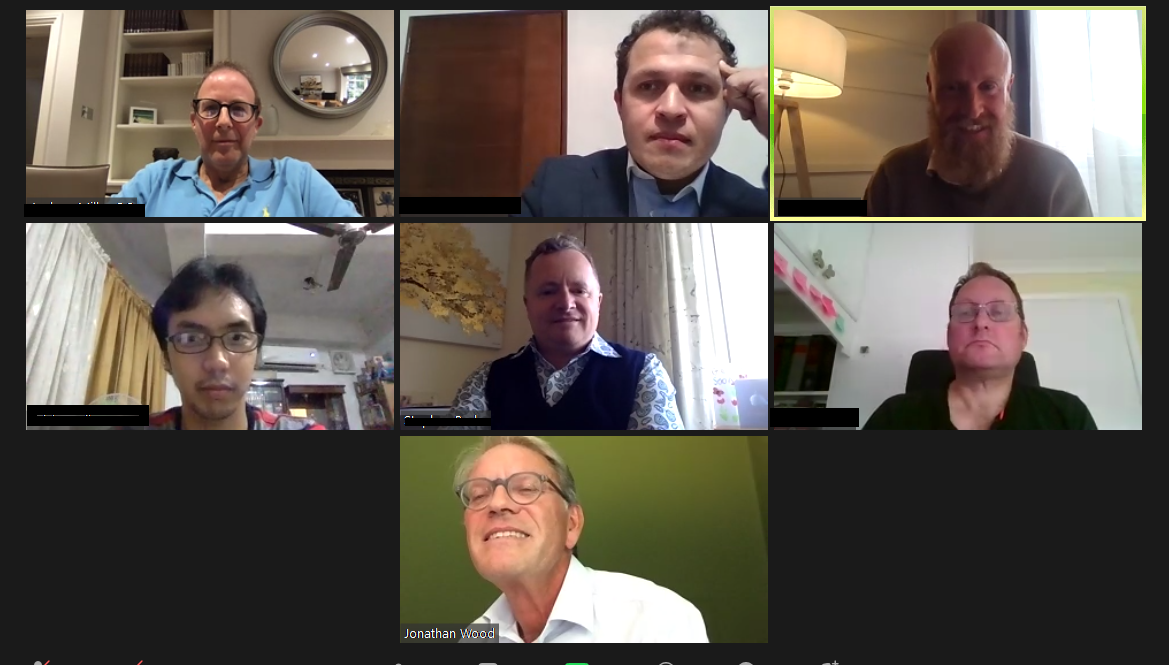 On the notion of diversity, Catherine was asked whether CIArb would be instituting positive discrimination. She argued that she was in favour of such action where needed, and that she especially agreed with Francis’ and Jonathan’s regarding the promotion of diversity throughout the entire organization. Nevertheless, she admitted that there still exist areas that could use some improvement on a case-to-case basis.

Answering a question on what CIArb is doing to address diversity at a leadership level, Jonathan and Francis responded jointly by saying how CIArb’s already sports a diverse board of trustees, although there is room for improvement. Jonathan then went on to highlight the need for diversity in skillsets. He made the case for more non-lawyers and business representatives to enter the industry in order to bring additional focus on diversity in professional backgrounds and accessibility. Francis chimed in by arguing that “CIArb stands for diversity – presidents has come from all around the globe. CIArb is synonymous with diversity and it is part of the organizations very core”.

Marion turns the conversation over to address CIArb’s unique selling point: “It starts with every member realising their status as a key player in the organization. The organisation needs to further its leading role throughout the industry, for example within though leadership”, Francis said in response.

Catherine instead focused on the postnominals and highlighted how our unique system of professional standards in combination with our trademark system of postnominals gives the CIArb name and brand a unique position in the competition. 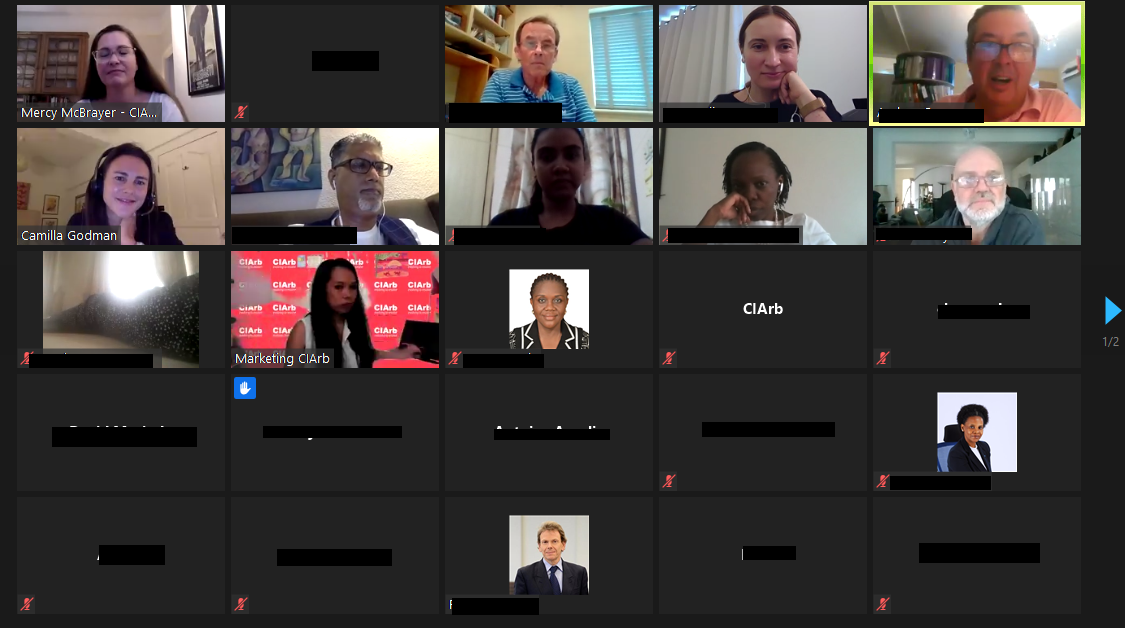 Marion then turned to mediation and how we can promote it as a powerhouse within the industry. “There is a real commitment to do more in terms of training opportunities and focus through new strategic approaches. It is very important to keep working with our collaborative partners, but also to look over the name of the institute at some point”, she argued.

Marion also brought up the notion of UK-centrism. “When will another language be available and when will other legal systems take centre stage?” she asked the panel. Jonathan responded by mentioning how CIArb offers courses that are available in Spanish, whilst noting how translation courses into other languages is indeed desirable but complicated. However, the panel were in agreement that CIArb wanted to steer away from the UK-centrism of the industry, with Francis noting how CIArb aspired to reach practitioners across the world. “With the emerging digital toolset, the rate of penetration into new emerging markets and territories can be sped up. There is also a need to expand into the civil law tradition”, he concluded.

Marion asked how career prospects are for non-lawyers within the ADR complex, prompting Francis to point out how the future would indeed need more experts as dispute resolution.

Marion asked Jonathan how networking can be improved. He argued that promoting networking events within the industry and career websites like LinkedIn could well be the way to go. “Keeping in touch with colleagues, existing and potential, is also key”, he said.

“How do you get to see a live ADR process?” Marion asked. Jonathan jumped on the question and pointed to CIArb’s mentoring system, and again encouraged senior personnel to become mentors. He also mentioned and encouraged participation in moot court competitions. Catherine added onto Jonathan’s answer by promoting CIArb’s programs focusing on young practitioners getting their first appointments.

Marion lined up a quick-fire round, the panel and the audience was overall in resounding agreement on the questions at hand.

With all the questions answered, Marion again thanked the panel and the audience for their time and attention before announcing that the event would now be broken up into smaller groups for the networking session where attendees were put into smaller groups to network with colleagues as well as other ADR practitioners in attendance.

This opportunity was seized by a plurality of the attendees, making it another great occasion where practitioners, students, and academics alike got to meet and learn from some of the best in the business. 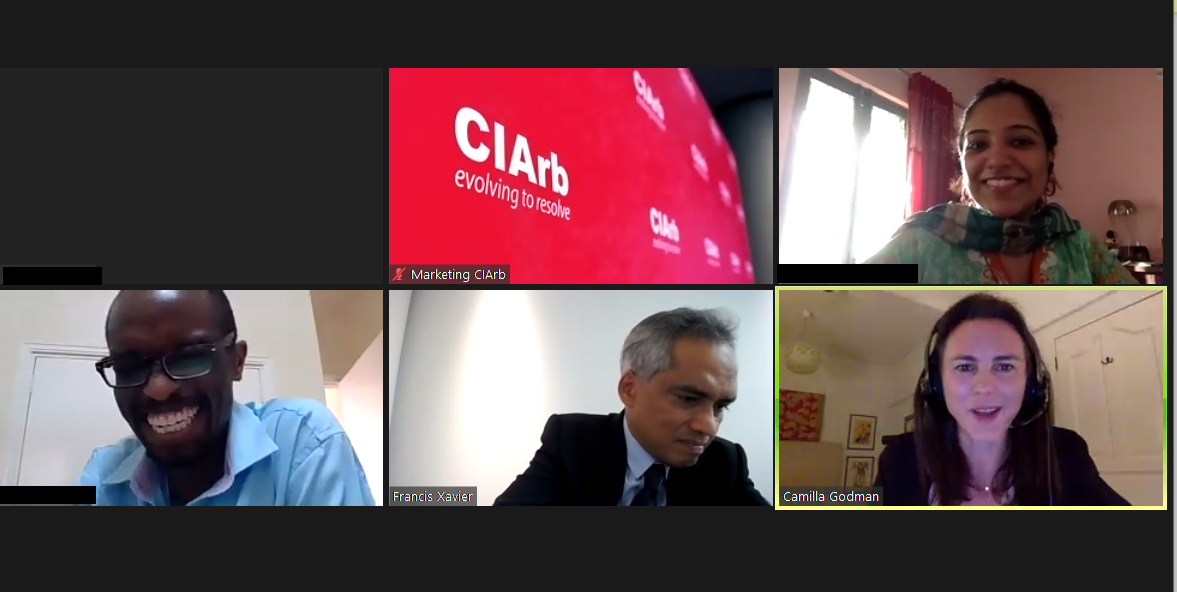 To read the answers to the pre-submitted questions that our speakers did not manage to answer during the Q&A session, please click here.

The full video recording of the event is available under our media archive page.

CIArb's Western Counties Branch has over 330 Members, Fellows, Associates, and students and some of our members are well known Arbitrators, Adjudicators and Mediators in the UK and internationally.

Jane Gunn FCIArb, looks ahead to the coming year and sets out her vision as President of CIArb.

CIArb’s Immediate Past President’s reflections on 2021

Ann Ryan Robertson, CIArb’s Immediate Past President, reflects on her experience as President during 2021 - a challenging but ultimately rewarding and robust year.