Mediation in Times of Crises: How Would You Define It?

“Mediation is a skill for the future and it is up to us to decide what future we want and to shape it.” - Jane Gunn FCIArb.

Kindly hosted by Grant Thornton LLP, CIArb's 12th Mediation Symposium which was held on 27 September 2019 looked at “Mediation in times of crises”.

What does 21st century look like? The history the mankind has been through, the lessons we have learned still do not let us live a peaceful life: Wars, political upheavals, military conflicts, economic instability, environmental disasters are some of the examples of existing crises.

Before the Symposium I tried to imagine what “Mediation in times of crises” topic would cover and have to admit that this time my way of thinking appeared to be slightly cliched: With current political instability in the UK and Brexit being the “cherry on the cake” I imagined the theme would be the possibility to mediate Brexit as well as influence of Brexit on mediation between the UK and the EU members crossed my mind first.

Crucial nature of these issues was numerously mentioned during the day, however, I am expressing gratitude to Dr Paresh Kathrani for putting together the programme and for inviting professionals who gave me an opportunity to be inspired by their priceless knowledge and insights on other types of crises.

After his welcome speech, Dr Kathrani introduced the first two distinguished speakers: Jane Gunn FCIArb and Amb. (r.) David Huebner C.Arb FCIArb, who went on to unfold their experiences and views on the topic of the agenda. 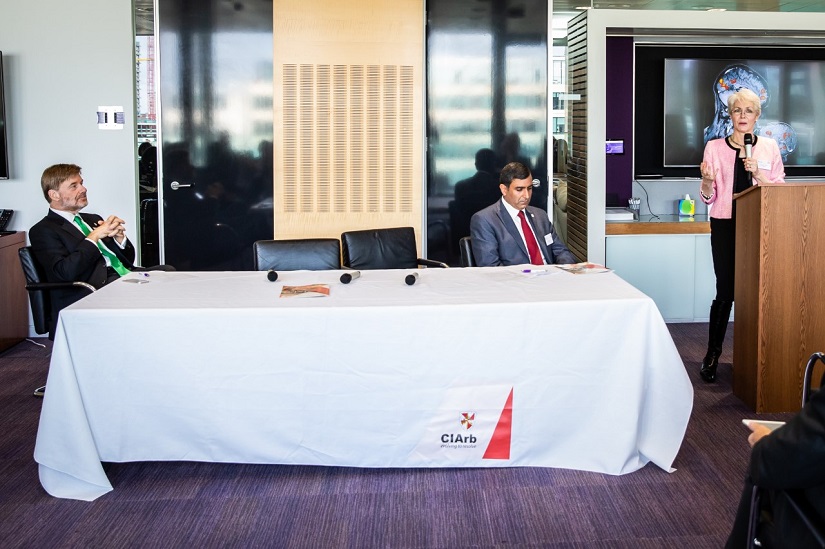 Jane Gunn’s speech let the audience imagine to be in a time machine and think of what mediation would be like in the future, especially if we had the power to shape it. She took us back to the 18th century when, unlike in the 21st century, people’s way of thinking, processes of the brain and actions could not be explained or analysed. Today, we are getting more knowledge about why people make certain choices and behave in a particular way in organisations, politics, mediations etc.

Jane made a beautiful connection of her speculations with the role of mediators beyond the processes of mediation and how they can assist people, organisations and even nations in a modern world, especially in times of crises, considering not only facts and calculations, but also “sensations, emotions and thoughts”.

Ambassador David Huebner continued our exploration of the agenda, which, in his view, defines living: Crises and challenges are not new, they are versions of the ones that we have faced before and will probably face again.

David talked, in particular, about his role as a discussion facilitator and consensus builder during his diplomatic service for President Obama.

Clashes of positions, especially when diplomacy and politics are at stake, are inevitable. In David’s opinion, instead of pointless arguing, it was an important decision to concentrate on “building a foundation for conversation”, not from argument, but from actions, while using diplomatic techniques which at that time were widely considered utterly non-traditional.

In times of crises, it is counterproductive to pay attention to the existence of crises, whereas incredibly important to focus on addressing them and try to preserve even the most vulnerable surrounding relations. In David’s view, crises had been a chance to identify important principles and new partners in particular with a view to create new, fruitful relations and hence be able to effectively address future problems.

The topic of the event was subsequently developed during two sessions of parallel interactive workshops. Morning workshops: By Iain Christie (Leadership skills and crisis management: “It’s Leadership, but not as we know it”), Jane Walmsley MCIArb (Public relations and crisis: “What should we talk about when we talk about mediation?”) and Rammit Kaur Charan Singh FCIArb (Coping with expectations during uncertainty: “Implementing Policies and Protocols for Workplace and Employment Mediation”). Afternoon workshops: By Dr Zaza Johnson Elsheikh and Spenser Hilliard (Intervention in the course of personal emergencies: “Why does the brain cope so poorly with uncertainty”), Chris Flickinger (Contemporary crises and mediation: “Vision Architecture: See It, Build It, Support It”), and another fitting addition to the afternoon: "Brexit through the looking glass”, by Iain Christie who also facilitated a different group earlier that day.

As visitors could choose only one workshop in each part, I had an honour to first attend Rammit Kaur’s session. Rammit’s presentation took its roots from identifying basic features of mediation, such as neutrality, privacy, time efficiency and consent in the context of employment mediation and proceeded with demonstrating how important it is to promote implementation of mediation policies and protocols at workplaces in order ensure a secure and comfortable environment for employees, whose positions might be rather fragile in case of conflicts with their colleagues/directors etc.

In Rammit’s view, standard mediation policies embodied in an employer’s practices should include timelines, agreement to mediate, conditions of privacy (especially when meetings are held at a workplace or when an in internal individual is appointed as a neutral) and enforcement. Implementation of such policies might be done through, in particular, promotion of advantages of mediation, as well as its benefits for both employers and employees, customisation of settlement processes depending on the industry and keeping the process flexible.

The second workshop I attended was led by Dr Zaza Johnson Elsheikh and Spenser Hilliard, who have together become involved in mentoring people who are at the end of prison sentences and quite often experience severe personal crises.

The speakers let us focus on exploration of, inter alia, situations where an individual is within a dispute while involved in a mediation and how neutrals, understanding a possible necessity to breach confidentiality, should act.

In this context, responsibilities of mediators are more delicate and unusual and involve a possibility of a breach of confidentiality (for instance, in case of mental health issues of one of the parties), rebuilding trust after confidential information has been reported by a mediator, active listening to reduce a party’s feeling of betrayal and, finally, empathy with a sense of anxiety.

In the final part of the workshop, Zaza and Spenser introduced a case study about all twists and turns of a situation where a mediator is dealing with a party with suicidal tendencies. The heated debate initiated by the true story did not result in a full consensus among participants, however, provoked deep and controversial speculations: how the matter should be reported and whether it should be reported at all or further explored by a neutral, as well as the scale of responsibility.

I was amazed how accurately Jane Gunn’s views expressed at the beginning of the day mirrored the merit of this workshop: Where not only bare knowledge, but also “sensations, emotions and thoughts” are applied, it will be easier for a mediator to find and deal with a fine line between personal and professional. 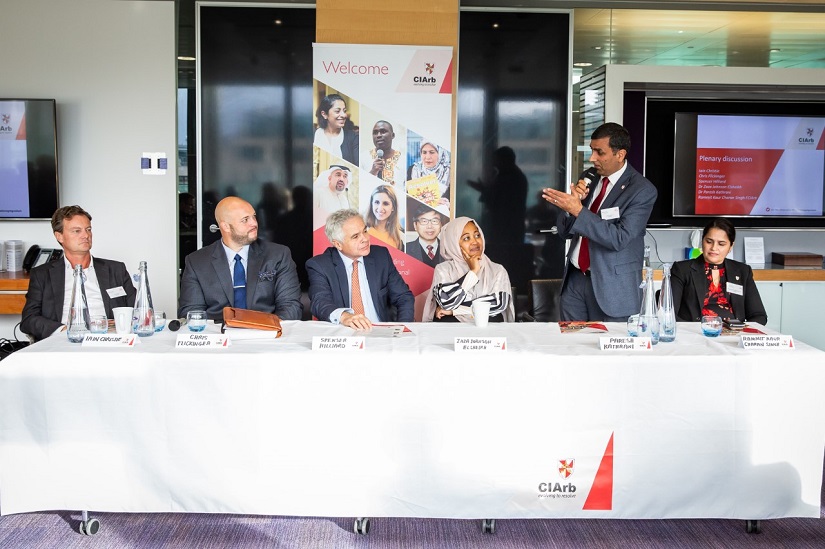 The official part of the Symposium ended with a panel of speakers who lead workshops throughout the day sharing their views on what a crisis is, in particular in a mediation context.

I believe that each person in the room had their own answer to this question, depending on their background, mood, life or work experiences etc.

Whether it is a conflict at work, that does not allow a person perform their everyday duties or a situation where someone is going through an internal crisis where hope or even sense of life are being questioned. What pattern of behaviour should a mediator follow? The speakers not only let us rehearse simple, but powerful maxims about mediation and neutrals managing it, but also allowed us to look inside the kaleidoscope of different, even the most delicate situations mediators might encounter and how important it is to stay professional, but also remember about human feelings and emotions and how destructive and at the same time encouraging they might be, especially in times of crises.

More information about the event and speakers’ biographies can be found here.

Photos from the Mediation Symposium are available here.