On 8 March 2019, CIArb celebrated International Women's Day with an evening lecture delivered by Lucy Greenwood C. Arb FCIArb entitled "Why I don't have a boiling tap: the effect of social conditioning on careers in the law". The event was generously hosted by Pinsent Masons LLP. The lecture was very well attended and marked one of many CIArb initiatives in promoting diversity and inclusion in ADR.

At the beginning of the event, Marion Smith QC FCIArb welcomed the attendees and briefly described CIArb's actions and policies reflecting its commitment to diversity. She underlined that although the main focus of the night was on women, the true point of the events like that was about embracing inclusivity. She further referred to functions of an arbitrator such as the capacity to decide, to inspire trust, capacity not to need approval and manage the proceedings and emphasised that these skills are not exclusive to any specific gender, race, nationality or social class. Marion then introduced the speaker – Lucy Greenwood C.Arb and reflected on Lucy’s significant achievements and a great contribution to CIArb.

Lucy started by mentioning the centenary of the Sex Disqualification (Removal) Act 1919, which enabled women to become barristers, solicitors, jurors and magistrates. She then quoted the current statistics which indicated that although females constitute 68% of current law students and 62% of trainees there are only around 20% of female equity partners in law firms. These statistics are similarly alarming at the bar, where only 29% of barrister are women and only 13% are Queen's Counsels. She described the phenomenon of a pipeline leak which referred to women leaving the profession before reaching senior ranks. As reasons for this situation, Lucy listed difficulties in managing careers and child care, together with the lack of flexible working hours and female role models on the senior positions. However, as she pointed out, according to the survey conducted recently by the Law Society among female lawyers, it was an unconscious bias that had been identified as the greatest barrier to women's careers.

In that theme, Lucy continued her speech focusing on the effects of unconscious biases and possible ways to address challenges arising out of them. According to the studies, people act differently to babies based on their sex which resonates in their future behaviour and occupation. Social conditioning and gender stereotypes further lead to unconscious bias which holds women back in their careers. Our behaviour is not entirely under our conscious control but it is driven by learned stereotypes.

Lucy further clarified the origin of the title of the lecture. She explained the decision not to install a boiling tap in her kitchen which would have provided her with immediate access to hot water instead of a need for boiling it, was a deliberate choice she had made. This decision granted her five minutes of waiting for the water to be boiled during which is able to complete multiple small tasks and chores. She then referred to the unequal division of so-called mental load in the majority of couples where usually the women are burdened with the significantly greater proportion of family chores that are difficult to outsource. Lucy further explained that she did not make a decision to become a multitasker and burden herself with this mental load, but she was socially conditioned to behave in this way and so are other women. 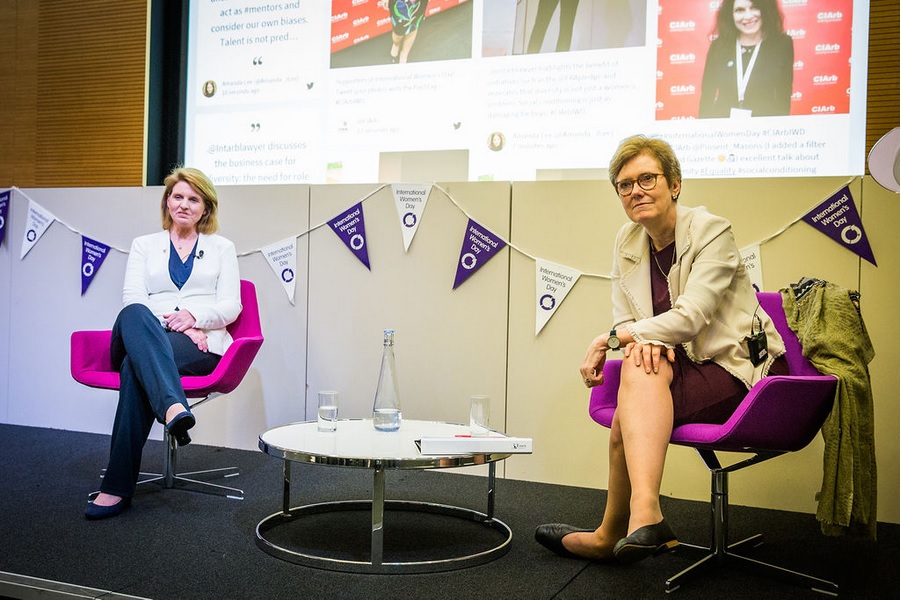 She continued the topic of social conditioning and unconscious bias by providing some further examples of this phenomenon. For instance, resumes with female names are rated lower in comparison to male resumes with the same qualifications. Moreover, replacing women's name with a man's one on the resume can increase the chances of getting hired by 60%. Furthermore, there are different responses to the same situations faced by men and women. She referred to an example in a "Lean In: Women, Work, and the Will to Lead” book by Sheryl Sandberg where a couple of lawyers working at the same law firm had a baby. After the mother had returned from her maternity leave she was continuously sent home at 5 pm as a parent who had a baby to look after, whereas her partner was regularly kept late as a person who had a family to support.

Lucy noted that there is an increased awareness of the unconscious biases and their implications. As the initiatives undertaken to combat gender stereotypes and increase diversity, she mentioned Equal Representation in Arbitration Pledge and ArbitralWomen’s Diversity Toolkit. In her opinion, the most significant progress made so far is raising awareness that gender inequality is not only a women's issue.

As a reasonable solution which can be undertaken by anyone Lucy recommended taking a critical look at messages sent to the younger generations. She urged the audience to be conscious about the way they are approaching children as the gender stereotypes set in their childhood resonate broadly on their future careers. It is also important not to make assumptions and try to re-programme our brains to fight unconscious bias. When it comes to practical steps to fight unconscious biases she suggested providing access to flexible working hours, creating networking opportunities and mentoring younger practitioners.

However, she remarked that one of the main challenges is to “re-wire our brains” to counteract our subconscious biases. She illustrated this point with a humorous video clip of people trying to learn how to ride a so-called “backwards bike” (a bike that works in reverse - if you turn the handlebars left, the front wheel will turn right, and vice versa). All the participants in the experiment failed to adjust their brains to learn how to ride the backwards bike and it took the researcher eight months to master it. Lucy noted that if re-learning a discrete skill such as riding a bike was this difficult, the challenge of re-learning our subconscious prejudices would likely be even greater.

In the end, Lucy invited the delegates to review their behaviour and refrain from making assumptions as talent is not predicated by gender.

The lecture was followed by a lively Q&A session after which the discussions were continued during a drinks reception generously sponsored by Pinsent Masons LLP.

More photos from the event is available here

For more on how CIArb is celebrating International Women's Day read our series of short interviews with female arbitration and mediation specialists from around the world here.