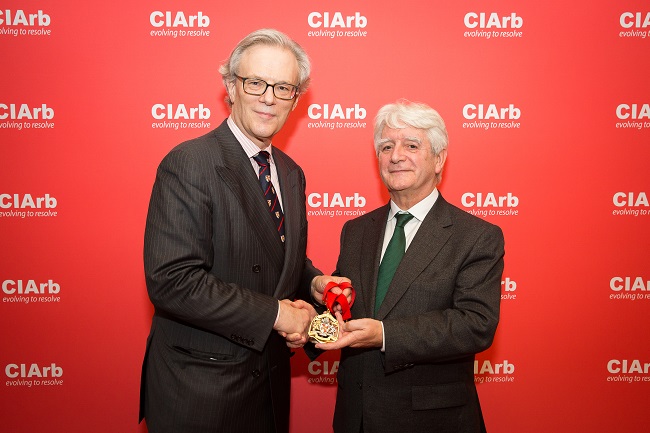 At the beginning of the event, Tom Cadman (Director of Governance and Legal Services at CIArb) welcomed all of the participants. He introduced the keynote speaker, Lord Justice Coulson, and provided a brief outline of the convention.

He further thanked the gold sponsor - Arbitralis and Norton Rose Fulbright for generously hosting the event.

Lord Justice Coulson opened his remarks by recalling that not too long ago the ethics of judges and arbitrators were not questioned. He further concentrated on the areas of improvement such as transparency of appointments and the issues related to conflicts of interest. By referring to confidentiality as one of the most emphasised features of arbitration, he noted that there is concern about overplaying the ‘confidentiality card’, which should never be an excuse for the lack of transparency. He concluded by putting emphasis on the ethical standards in the profession and CIArb's role in ensuring these standards are kept.

The first panel, moderated by Marion Smith QC (39 Essex Chambers), discussed the dispute boards and debated over the advantages and disadvantages of med-arb and arb-med.

Lindy Patterson QC (39 Essex Chambers) introduced the dispute boards as a panel of individuals providing either non-binding advice for the parties or binding decisions on disputes arising out of contract. She further explained that dispute boards are commonly used for construction disputes resolved under FIDIC or ICC rules.

Paul Klaas FCIArb (Maitland Chambers) appeared in favour of the med-arb and arb-med solutions, considering them as a future necessity for the arbitration community and an efficient way to save time and costs of the proceedings. He metaphorically compared med-arb to a direct flight on which the same pilot takes the passengers directly to their desired destination. He supported his notion by referring to the CIETAC Arbitration Rules, where med-arb solutions are commonly used.

Irvinder Bakshi C.Arb (KSB Law Consultants Ltd.), who appeared against the med-arb solutions, raised the question of the ability of a mediator to remain impartial after being transformed into an arbitrator. She pointed out that arbitrator's impartiality may be compromised by the information he obtained during the mediation phase.

Her Honour Frances Kirkham CBE (Atkin Chambers) opened the second panel by reminding the audience that quality of arbitration relies on the quality of its arbitrators. She encouraged professionals to conduct a careful assessment of their suitability and impartiality before accepting appointments as arbitrators.

Robers Sliwinski FCIArb C.Arb (CIArb Panels) started the panel discussion by stating that problems regarding costs and delays often originate from the wrong choices in the selection of arbitrator. He then listed important considerations that should be taken into account before the appointment, such as: academic qualifications, experience and not only the competency of the candidates but also their management skills and availability.

Tim Hardy FCIArb (CIArb’s Practice & Standards Committee) explained the importance of the pre-appointment research and interview with the potential arbitrator. He sought to remind all that there are cultural differences to be kept in mind in order to avoid challenges of arbitrators on the basis of their impartiality. As a potential solution, Tim referred the audience to CIArb's Guidelines on the interviewing of prospective arbitrators.

Jasbir Dhillon QC (Brick Court Chambers) spoke on the importance of questioning possible conflicts of interest prior to the appointment of an arbitrator. He elaborated on situations when the same scenario concerning conflict of interest is considered differently by the IBA Guidelines and by the applicable law.

James Rogers (Norton Rose Fulbright) opened the third panel discussion by reflecting that in order to survive, arbitration must continue to be seen as a legitimate and fair process.

John Bishop (Arbitration Chambers) provided a summary of how ethical standards are regulated in various international arbitration rules. He advised using helpful instruments concerning ethical dilemmas such as the CIArb Code of Professional Conduct or the IBA Guidelines on Party Representation in International Arbitration.

Thomas Halket, FCIArb C. Arb (CIArb Deputy President 2018) provided the audience with an American perspective to the problems of ethics in international arbitration. He also gave an explanation of  'Canon X' arbitrators, by referring to Canon X of the American Bar Association's Code of Ethics for Arbitrators in Commercial Disputes; which specifically exempts some party-appointed arbitrators from certain expectations of neutrality where the parties so agree.

Janice Feigher (Norton Rose Fulbright) presented the French perspective regarding the ethics of decision makers. She summarised cases which had damaging consequences to the reputation of arbitration publically and caused the French courts to raise the threshold for arbitrator impartiality.

The last part of the convention contained a session discussion and Q&A with representatives of CIArb.

Olena Gulyanytska (Head of DAS) exclaimed the CIArb’s vision to deliver education and training and facilitate dispute resolution. She explained that DAS does not administer cases but makes suitable, informed recommendations or assists in appointing decision-makers. She further briefly described the various schemes ran by CIArb, such as: the Business Arbitration Scheme (BAS) or IMPRESS Arbitration Scheme. This part of the convention was followed by multiple questions from the audience which evolved into a lively discussion.

In his closing remarks James Bridgeman SC C.Arb (CIArb President 2018) provided relevant statistics of the CIArb's performance during the last three years and thanked all of his colleagues from the CIArb for their invaluable assistance during his presidency. He then introduced the new President Thomas Halket, FCIArb C.Arb.

Thomas thanked James and addressed the question of the theme of his forthcoming presidency. He focused on education and mentoring as well as the application of new technologies to arbitration practice together with facing challenges such as transparency and diversity, which he summarised as "confronting the future".