The pandemic has provided the opportunity to tap into a rich vein of science fiction references, and the Chartered Institute of Arbitrators’ (CIArb) annual mediation seminar proved no exception.  Hosted by the International Dispute Resolution Centre (IDRC), those attending were treated to a first glimpse of its brand-new building in St Paul’s, London – so new that it’s still under wraps.  As a sign of the times, top of the features at the 46,000 square foot dispute hub facility, introduced by the IDRC’s Damien Hickman, was its clean air ventilation system, designed to remove 99.9% of bacteria and viruses. He explained that the IDRC took advantage of the opportunity to build what it wanted to provide state of the art facilities and a real community for dispute resolution practitioners.

Chair of the CIArb’s London Branch, Ben Giaretta FCIArb, welcomed those attending the first in-person event since 2020, to a ‘brave new world’.  Alternative dispute resolution (ADR) and Aldous Huxley’s ‘World State’ vision of a future, state-engineered society may seem incongruous, but as the seminar co-incided with the release of the Civil Justice Council’s (CJC) report on Compulsory ADR, discussion inevitably focussed on the extent to which the state can, or should, force dispute processes upon the parties.

The panel, moderated by the well-known commercial mediator, Gill Mansfield FCIArb, included the chair of the CJC report committee, and ‘all things ADR’, Lady Justice Asplin, who joined by Zoom and gave the brave new proceedings a further flavour of the futuristic. The report addresses two key issues – whether parties to a civil dispute can be compelled to participate in ADR, and if so, whether they should be. These apparently simple questions raised a host of underlying issues as to the form and nature of available ADR processes, the basis upon which their merits can be evaluated and the means of imposing them, even if it were desirable to do so.

The report concluded that parties can lawfully be compelled to participate in ADR but recognised that, as ADR encompassed a range of processes, including judge-led financial dispute resolution (FDR) early neutral evaluation (ENE) and the ombudsman processes, there was no hard and fast rule for the use of these flexible ‘power tools’.

Early commentators have come out against the proposals, predicting a slippery slope to the abolition of the courts in favour of ‘blind-bidding’ and AI-driven ‘bot-justice’.  Lady Justice Asplin reassured the audience that the courts were not about to be disbanded tomorrow, but equally believed that criticism would not in itself hold back the process.  Rather, she called for evidence to enable the courts, and their users, to embrace the opportunities presented by the variety of ADR techniques available.

Jane Andrewartha, a partner with Clyde & Co and one of the UK’s foremost mediators for major international multi-party disputes, considered confidentiality clauses in mediation agreements and whether they prevent the mediator from being summonsed to give evidence in subsequent proceedings as in Farm Assist v DEFRA (2009), or to prevent the subsequent production of documents provided in the mediation following Berkley Square Holdings v Lancer Property Asset Management (2021).  This decision, which permitted Lancer to use its own mediation paper to disprove Berkley’s subsequent allegations of fraud, may present problems for mediators who are party to information which may now be accessed by the courts.  On the issues raised by the CJC report, Jane Andrewartha suggested that parties to high value cases were familiar enough with the benefits of mediation as an alternative to trial, not to need to be forced to use it.  The utility of compulsory mediation should, she suggested, be considered in the context of the old army adage that one volunteer was better than 10 pressed men.

Jon Lang, formerly a partner with White & Case, now a full-time mediator, considered the role of fairness in compulsory ADR from the perspective of the courts and their users.  The courts need it to reduce the burden on the system.  Cheap and cheerful ADR may be a cost-effective alternative, but mediation is an unregulated process.  It takes place behind closed doors, with no codes of practice for the participants beyond the mediation agreement, in which references to ‘good faith’ are more often recited than defined. In Kumar v LB Hillingdon (2020), the Local Authority argued, not only that it was not necessary for Mrs Kumar to be represented in the mediation of her claim for special needs education for her son, but that it was necessary for the process that she should not have a lawyer.  Absent any formal checks and balances, however, it is to be assumed that Hillingdon was acting in good faith.

The Q&A covered a wide range of issues including funding – the Ministry of Justice has funds available and could save money if ADR were successfully adopted; the insurance position – insurers are mediation-friendly and much prefer it to trial; the surprising extent of ENE used, and whether construction adjudication, now 21 years established, should be considered as a specialist form of ENE.

The London Branch’s Andrew Davies MCIArb concluded with the vote of thanks and the proposal that all the topics discussed be reviewed at follow up session in the not-too-distant future - Brave New World II, perhaps. 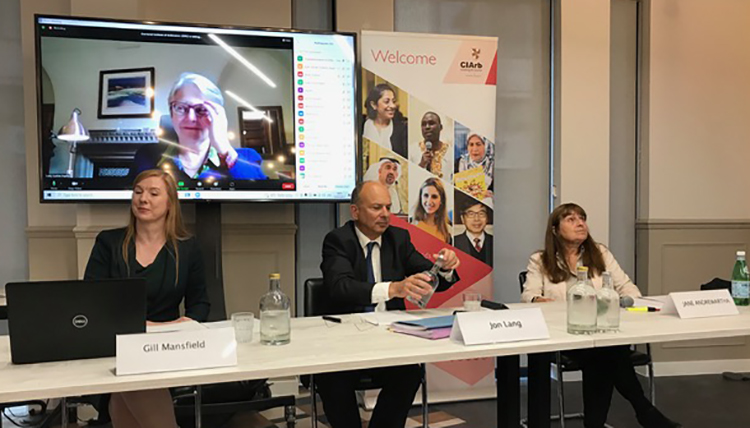 The UK government has reopened its Expression of Interest campaign seeking suitably qualified people to appoint to lists of arbitrators and expert panellists for the dispute settlement mechanisms within the UK-EU Trade and Cooperation Agreement (TCA). The deadline for new applications is now 11.00pm on Sunday 19th September.