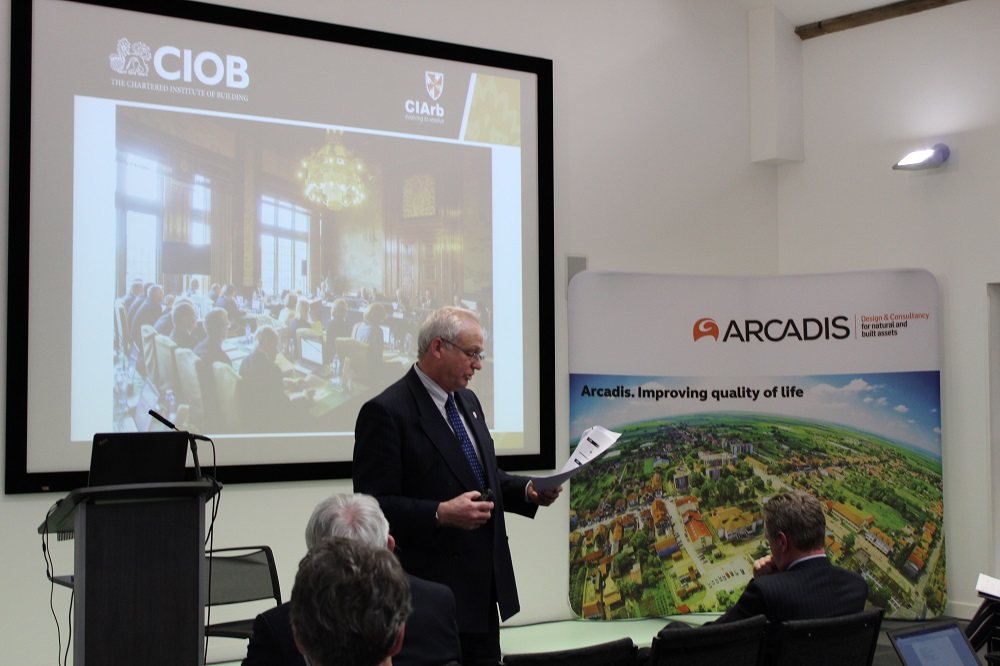 Hosted at the Arcadis offices in Kings Cross, a speaker line-up consisting of experts Anthony Abrahams MCIArb , Chris Blythe, Peter Collie FCIArb  and Francis Ho assembled to deliver an informative conference on ADR and its role within the construction/building industry.

Members were welcomed by Chris Blythe OBE, who as the Chief Executive of the CIOB, thanked everyone for their attendance and initiated proceedings with run-down of the forthcoming evening.

Setting the scene from then was CIArb’s own Director General Anthony Abrahams who began by providing an insight into the role of the Chartered Institute and the ‘Golden Thread of Arbitration’ – developing education, training and qualifications, developing the learned society and facilitating ADR. The speech continued into the differences in ADR methods, the benefits over litigation and multiple interesting analogies which highlighted the importance of choosing the correct methodology in resolving disputes. Mr Abrahams also offered persuasive statistical reasoning for the need to integrate ADR into businesses and why it is vital to develop effective resolution clauses within contracts.

Mr Abrahams was followed swiftly by Penningtons Manches’ Partner Francis Ho who introduced the UK construction industry and the way in which it had evolved to incorporate the need for ADR routes such as adjudication, arbitration, mediation, conciliation and expert negotiation.

Finally the audience received renowned dispute specialist Peter Collie FCIArb who concluded with a talk in reference to ‘the common sense approach’ and a comprehensive illumination on dispute boards: their approach to disputes, previous successes and developments in major organisations whom have established Conflict Avoidance Panels.

The speakers were followed promptly with an engaging question and answer session which clarified issues such as site attendance from potential Dispute Boards, the political correctness of noticing issues, mutual IT systems and the role of sub-contactors within disputes.

Overall, the talk was exceedingly well received and was met with positive feedback during the drinks reception that proceeded its conclusion.