CIArb Book Launch - 'A Brand New World: The Evolution and Future of Arbitration'

CIArb hosted an event on 19 November 2019 to celebrate the launch of the new book - 'A Brand New World: The Evolution and Future of Arbitration' which was written by YMG members.

The launch of CIArb’s new book Tuesday 19 November was highly successful where over 130 attendees, including many students and practitioners, enjoyed hearing directly from two panels of authors as well as the editors. The evening kicked off with a welcome from Dr. Ugljesa Grusic of the UCL Faculty of Laws who generously hosted the event.  Next, Mercy McBrayer, CIArb Research and Academic Affairs Manager and producer of the book recognized some key people in the production of the book, including editors John Tackaberry QC and Rowan Planterose along with fellow producer Kateryna Honcharenko, CIArb Research Executive, without whom the book could not have come to completion.

The first panel of four authors spoke on topics with a future looking theme and was capably chaired by editor Rowan Planterose, FCIArb.  Dr. Bahar Hatami Alamdari spoke on the reluctance for the banking and financial sectors to use arbitration as a dispute resolution mechanism over litigation.  However, lessening availability of certain fora has caused a shift and an upward trend in that sector towards opting for arbitration.  Next, Sadaff Habib, MCIArb, got everyone in the room thinking when she proposed an idea for an international convention on procedural law in the same vein as the New York Convention.  Such a convention would help standardize widely varying practices in domestic courts on issues of arbitral procedure.  Then, Claudia Pharaon, MCIArb, presented the growing possibility of demand for arbitration over objects in space, such as satellites.  As more commercial companies enter the sector, the likelihood of disputes in arbitration surrounding those objects also increases, along with the possibility for unique considerations for such disputes. Finally, Dr. Fabio Cozzi discussed the potential for technology to effect arbitration.  From digital evidence management to virtual presence, universal translation to the use of magnetic resonance imaging to determine the truthfulness of witnesses, the future of arbitration could be very technological indeed.  Dr. Cozzi encouraged further study of the possible impact of using such high-tech solutions in arbitration.

The second panel, ably chaired by editor John Tackaberry QC, FCIArb, included four authors who spoke on issues increasingly effecting arbitration practice.  Dr. Shahrizal M. Zin, FCIArb, spoke on the intersection between culture and arbitration.  Domestic legislative developments on international arbitration has affected legal culture in many jurisdictions, and vice versa.  He also discussed how ethnic backgrounds arbitrators can create divergent outcomes between jurisdictions.  Next, Dr. Ioannis Glinavos presented a thought provoking view on investor state arbitration, arguing that the democratic processes by which states legislate can be seen as undermining the legitimacy of the system.  Many of the recent arbitrations filed against states have been in unforeseen policy areas, especially as claims against developed states have increased dramatically in recent years.  He showed the ability of the ISDS system to be used to stabilize policy as both a strength and weakness.

Stuart Boyarsky then tackled the issue of transparency versus confidentiality in arbitration and the recent developments in that area.  He highlighted the advantages and disadvantages to increased transparency and the payoffs that arise when confidentiality is the key concern.  This is a conversation of particular importance in disputes involving states or state entities, yet recent attempts to create multilateral procedures and agreements on transparency have been heavily promoted while remaining unsigned.  Finally, Nadya Berova examined the debate surrounding third party funding in arbitration and its impact on the practice, the extent of which is an ever-evolving issue.  She looked at potential conflicts of interests with arbitrators and questions surrounding third party funders’ influence on parties’ legal strategies in presenting cases.  She emphasized the effect third party funding can have on the use of security for costs orders by arbitrators and the use of funding assessments as a leverage tool for forcing pre-hearing settlement. 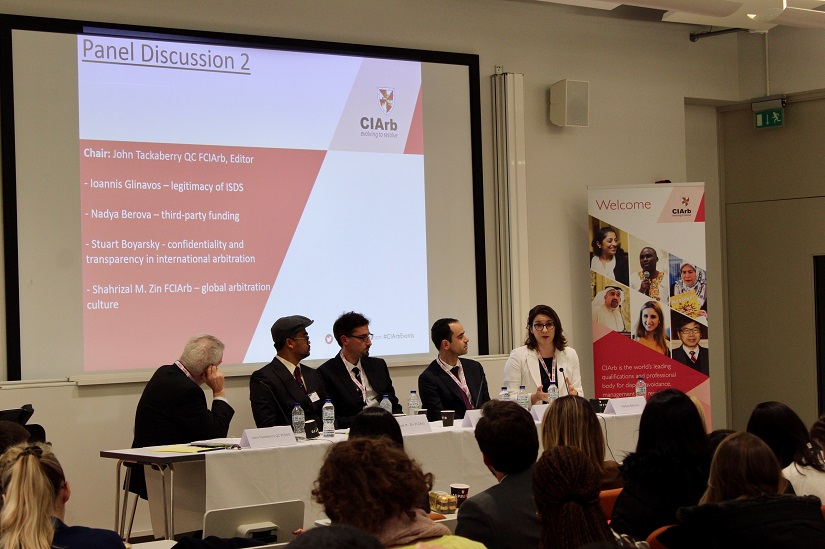 The topics presented sparked vigorous question and debate from both the panel chairs and audience members during the two open Q and A sessions.  Many students seemed particularly engaged by the technology and theory presented by the first panel while the second panel’s topics resonated with many of the experienced practitioners in the room.  Overall, the consensus was that the topics in the books are highly relevant and the topics presented are issues the arbitration community will be talking about more and more into the coming years.  The authors provided new insights and made thought-provoking predictions on the future of many areas of arbitration.

After a wrap-up highlighting the explosion in student memberships with the CIArb in the last two years presented by Anthony Abrahams, CIArb Director General, the attendees enjoyed continued conversation and discussion of the issues over drinks and canapes.

It is anticipated that the book will be available for limited sale via Amazon and as an e-book downloadable from the CIArb website in the coming weeks.

To view pictures from the event follow the link here.