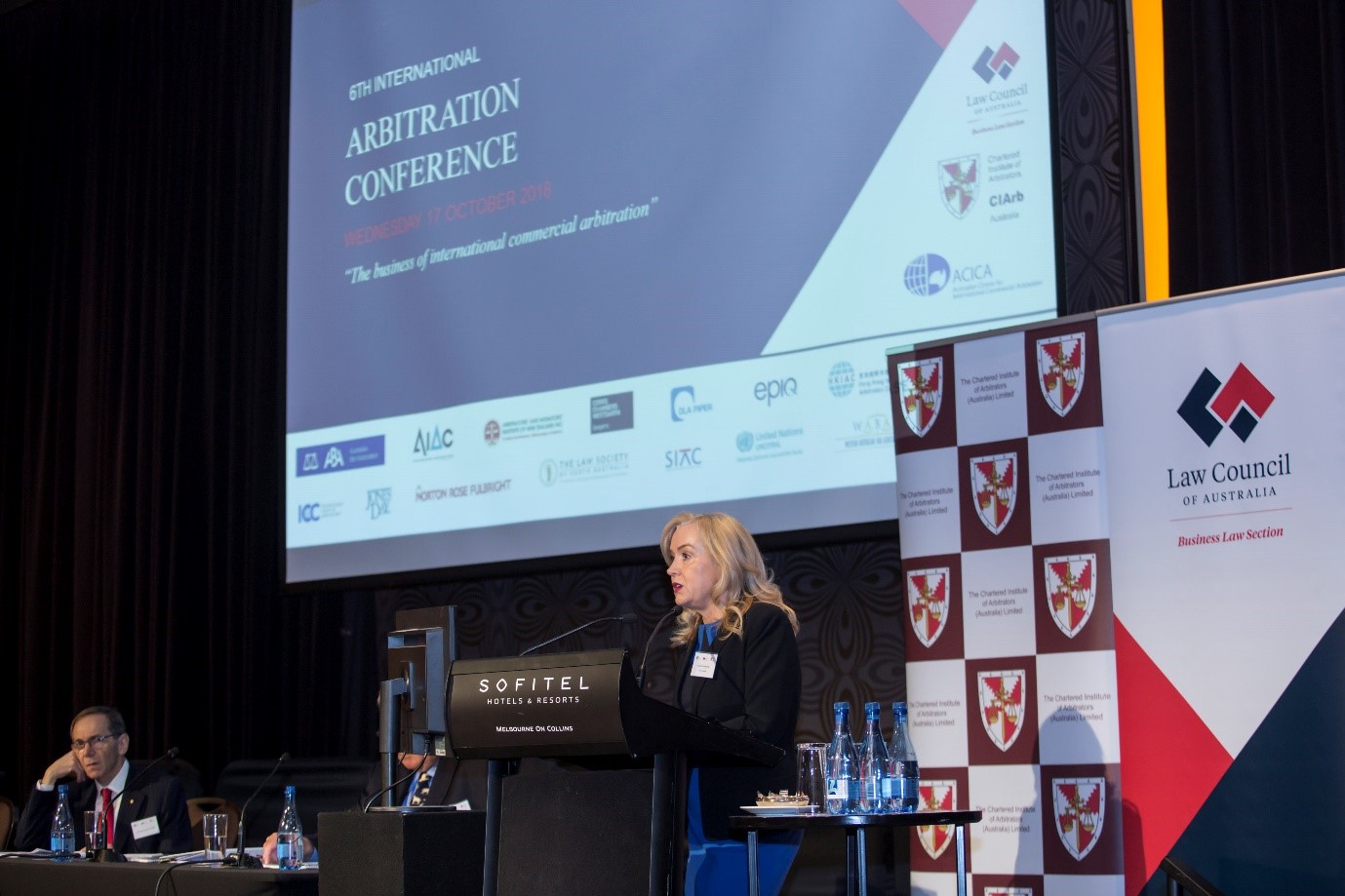 Welcome to the 2018 CIArb Australia Annual Dinner. We are delighted to be joined by so many guests from across Australia and around the globe including current and former members of the judiciary, representatives from prominent law firms, heads of institutes not only from Australia but as far reaching as the Middle East, Singapore and New Zealand.

Tonight’s dinner is the highlight of CIArb’s ever increasing program of seminars, training courses and social events which are spread across various jurisdictions.

A brief overview of activities for the year:

We held our 9 day Diploma course which we run in joint venture with the Singapore and Hong Kong branches of CIArb in Perth, Western Australia in July. The course attracted senior practitioners from China, Singapore, the Philippines, India and Australia including former justices of the Federal Court and Supreme Court. We held the Introduction to International Arbitration course in Brisbane, Queensland, the Accelerated Route to Fellowship course in Melbourne and the Award Writing course in Sydney, New South Wales and Melbourne, Victoria; all which lead to a global accreditation. In addition we held business lunches in Melbourne and Brisbane, Pre Vis Moot competitions and the seminars on international arbitration which we run in partnership with the Federal Court of Australia. This year we introduced two initiative into Arbitration Week: the inaugural CIArb Australia Annual Lecture delivered by The Hon Chief Justice James Allsop AO and the inaugural CIArb Young Members Group organised by the group’s chair and CIArb Australia Councillor, Kristian Maley.

It is fitting that Australian Arbitration Week returns to Melbourne as it is here in 1985 that the Australian Centre for International Commercial Arbitration (ACICA) was established under the Cain Labor government. I think all who attended the 6th International Arbitration Conference today which we organise in partnership with ACICA and the Business Law Section of the Law Council of Australia will attest to the variety and relevance of the panel discussions and the high calibre of speakers who came from across Australia and Hong Kong, Singapore, the United States, New Zealand, Dubai, and Sweden.

The title for this years’ conference is The Business of International Commercial Arbitration and it is aptly named because international arbitration is big business. It is interesting to note that although ACICA is the same age as the Hong Kong International Financial Centre (HKIAC) and older than the Singapore International Arbitration Centre (SIAC), both the Hong Kong and Singapore centres have gone on to establish themselves as major arbitration hubs. In these jurisdictions arbitration is a multi billion dollar business and growing. There is no doubt that Australia has lagged behind them partly because of its geographical position, but the success of Hong Kong and Singapore is also due to the significant attention, funding and promotion of the centres by their governments. We have much work to do to catch up with our Asian neighbours and much to gain if we do. The Australians in the room will feel very heartened by the address delivered by our keynote speaker, Dr Michael Pryles AO PBM at the conference. He made the case that there is room for Australia to develop as a third arbitration hub in the area particularly if Hong Kong becomes more integrated into China.

To make the business case for investing in international arbitration this year, CIArb Australia reached out to both state and federal governments. We were delighted that the Attorney General of Australia, Christian Porter, and the Finance Minister, Mathias Cormann, were able to join us at our CIArb Perth dinner in August. Minister Cormann was particularly interested to understand the initiatives taken by Hong Kong and Singapore to promote arbitration while the Attorney-General made a lasting impression by making the novel claim, though one we are prepared to wholeheartedly endorse, that Magna Carta was the result of a successful arbitration! We were also honoured to have the support of the Attorney-General of Victoria, Martin Pakula, at our annual business lunch in Melbourne this year. We have more to do to engage with Government to make the business case for international arbitration and we look forward to working with ACICA and other key stakeholders on this in the years ahead.

On the subject of big business, we are delighted to have Allan Myers AC QC deliver the 2018 CIArb Australia Dinner Address. As a partner from a major law firm, observed: "Allan is revered by his clients, feared by his opponents and held in the highest regard by the courts. I have seen him start an appeal against a '30 knot headwind and by lunchtime have the entire court behind him."

While it falls to Dr Matt Collins QC, President of the Victorian Bar, to formally introduce Allan, I wish to record what a great pleasure it was for me that Allan accepted our invitation to speak tonight. I have known him for more than 30 years. He lectured me in securities law at the University of Melbourne and he was formidable even back then. Much to the annoyance of the students, we had to start at 8.30 am so Allan could get to chambers on time. Allan would arrive, place his briefcase on the desk and proceed to lecture us. When the lecture was finished, he didn’t invite questions and I don’t recall anyone brave enough to delay his arrival in chambers by asking questions! When I became a solicitor I immediately thought to brief Allan, reasoning to myself that he’s working so hard I wanted to help him! Later, I had the great pleasure of being Allan’s junior on a number of important matters.

In closing, I wish to acknowledge my fellow directors on CIArb Australia, most of whom are here tonight, and have come from around Australia. They each contribute their time and effort to make the organisation operate as successfully as it does. A big thanks to our sponsors tonight, Jones Day and the Australian Bar Association and to our hard working and dedicated CEO, Gianna Totaro.

The UK All-Party Parliamentary Group for Alternative Dispute Resolution (APPG for ADR) met on Tuesday 17 May in Portcullis House.

CIArb held its first official event in Pakistan on 10 March 2021 at Jinnah Auditorium, City Court in association with Karachi Bar Association for a virtual audience.

The Chartered Institute of Arbitrators is working in partnership with the Law Society of Scotland to help promote the use of arbitration and other forms of alternative dispute resolution.