Roseline Obiageli Nwosu FCIArb, is a practicing lawyer called to the Nigerian Bar in July 1981 after obtaining her LLB Hons degree from Queen Mary College, University of London in 1980. She later obtained a Diploma in International Arbitration from the Chartered Institute of Arbitrators (CIArb) (UK). She is a Fellow of the same Institute, a Fellow of Institute of Chartered Mediators and Conciliators (ICMC) and an Accredited Mediator of Centre for Effective Dispute Resolution (CEDR)(UK). She is also a Notary Public of the Supreme Court of Nigeria. 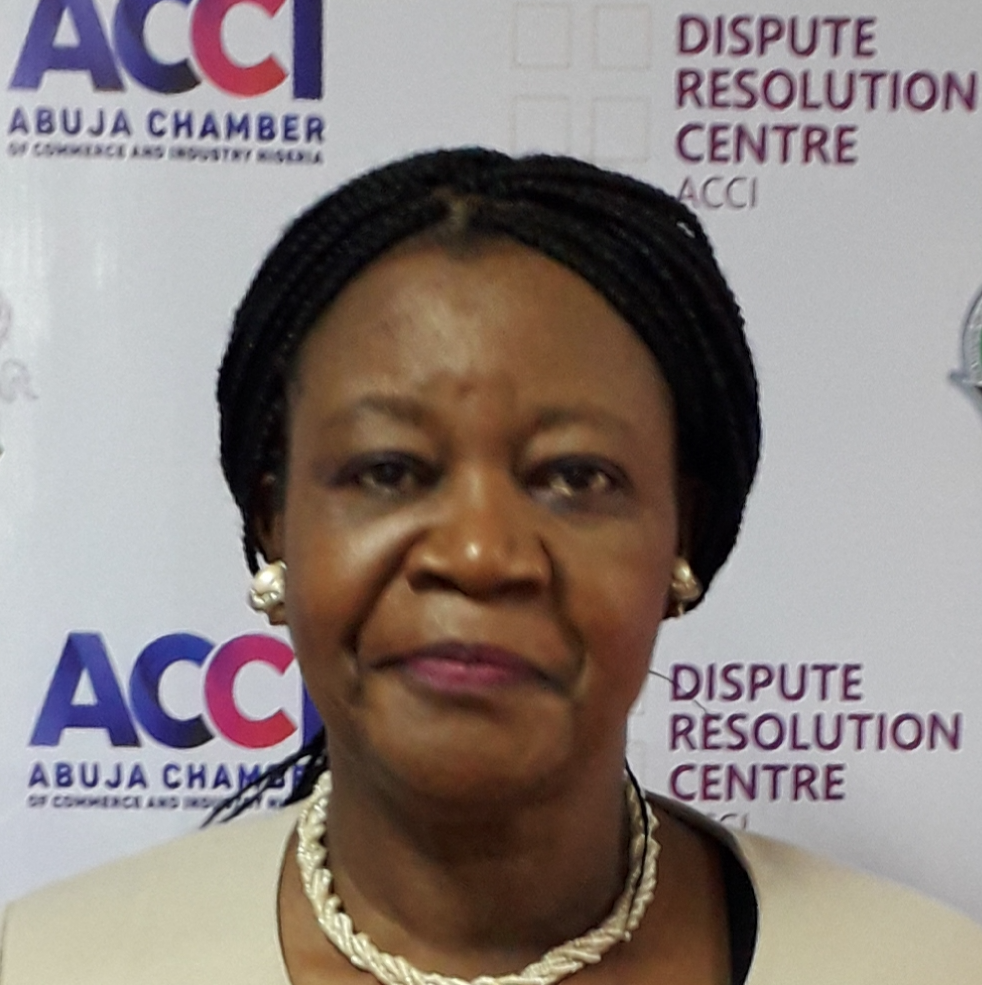 She has vast experience in Public Service having worked in both Federal Ministry of Justice and Corporate Affairs Commission Nigeria where she rose to the position of Deputy Director, Incorporated Trustees before going into private practice as the Principal Counsel in Rose O. Ojiako-Nwosu and Company.

She is an experienced Alternative Dispute Resolution Practitioner who has presided over many Arbitration and Mediation disputes with special interest in Commercial and Construction Arbitration and Commercial and Family Mediations. She is also a Fellow of Institute of Construction Industry Arbitrators and Member, Guild of Adjudicators in Nigeria (GAIN), Member, Family Peace Facilitators Network (FPFN)

She is also currently the Vice President, Women Development at Abuja Chamber of Commerce and Industry.

I decided to specialise in ADR which to my mind provided a more modern, effective, efficient, party-oriented method of conflict resolution. I felt that practicing in this area will give me the opportunity to help more people resolve their conflicts within a shorter period with its attendant benefits.

I was attracted to ADR when I realised the advantages it has over litigation. ADR has a wider spectrum unlike litigation. This wide spectrum provides a practitioner an opportunity to choose and specialize in his or her area of interest.

Other advantages ADR has over litigation which spurred my interest include time saving, being party driven and generally cheaper since parties can achieve settlement within a short/ reasonable time.

I think that the main obstacles faced by women in ADR in their early years of practice are gender-based biases and stereotypes and childcare problems which deprive them of the exposure and opportunities to learn from others.

Most parties will prefer to engage a male Arbitrator because of the stereotype that men are better leaders than women who should rather be followers. As such, women are offered positions as Registrars to Arbitration Panels/ Tribunals rather than Arbitrators. Therefore, it takes a lot of effort on the part of a female ADR practitioner to break away from such stereotypes and carve a niche for herself as being equally able to act as an Arbitrator or Mediator or in any other similar capacity.

I am motivated by my firm belief that ADR which has a wider spectrum is a more viable and effective way of resolving conflicts efficiently. Quicker resolution of conflicts enhances continuity in business relationships thereby enhancing commerce and growth of the economy.

I am also motivated by the fact that we now have very successful women ADR practitioners who are willing to share their experiences and are opening up the space for other women to follow. I know that in due course, and with a lot of networking and skill acquisition opportunities through workshops, trainings, and membership of different ADR fora and other similar exposures, I will be able to get to the peak of my ADR career.

I am very happy to have acquired the highest levels of certification in my preferred ADR fields, that is, Arbitration as a Fellow and in Mediation as CEDR Certified Mediator. I feel gratified and fulfilled when I successfully resolve disputes between parties through mediation and also when I deliver an award that stands the test of time.

In my CIArb chapter, Abuja, Nigeria, we organise various events and interactions with other lawyers and Judges of various Courts and that gives us an opportunity to preach the advantages of ADR so as to enlist their help in its promotion.

Initially, it was a bit awkward but with time, I got used to it. Through networking with the male practitioners, one gets to know them better and feel more comfortable. Working in a predominantly male dominated profession keeps me on my toes as I know I will be taken for granted if I do not put my best foot forward. Though most parties prefer male Arbitrators, when a woman proves her mettle, the issue of her gender becomes secondary.

Also as a part of CIArb faculty, I find the opportunity to train new entrants very gratifying and rewarding.

I think the future for women in ADR is very bright. A lot of women are shattering the glass ceilings and getting noticed both in their respective countries and internationally. In Nigeria, we have a few that have gained both national and international acclaim and I believe that more will follow in no distant future.

The greatest challenge I see in the future may be the ability of the women to adapt to new technology which are developing in leaps and bounds such as Artificial Intelligence and its effect in the practice of ADR. These are becoming more demanding by the day.

Many more people are becoming knowledgeable and comfortable with ADR and are more willing to give it a try when they learn about its advantages. More Multi-door Court houses are springing up in different States which brings ADR closer to the people in those areas.

However, the greatest resistance to the spread of ADR in a strange way is from lawyers who think it will lead to loss of income from litigation. Our Chapter however is dealing with those fears by constantly engaging with them and assuring them that they can actually earn more fees from ADR in a shorter period of time rather than wasting more years in litigation.

That would likely be UK. They have a very robust ADR system and practice. Also, they have a modern Arbitration Act which has reflected some of the innovations in the Model Law. Our Nigerian legal system is close to theirs and a lot of our laws are borrowed from UK. Nigeria is a common law country like the UK and the fact that I obtained my Law Degree from the University of London means that I am familiar with the environment.

I am an activist who is interested in the promotion, protection and enforcement of rights of women and children. I was once the Chair of Female lawyers: International Federation of Women Lawyers (FIDA) Nigeria, Abuja Chapter which has an NGO status with ECOSOC. At the moment, I am the Vice President, Women Development in my Chamber of Commerce, the Abuja Chamber of Commerce and Industry and therefore in charge of developing the capacities of women entrepreneurs.

I also have passion for peace building. My particular area of interest in Mediation is Family Mediation, that is, settling disputes between couples and family members in general.