Anthony Abrahams MCIArb TD DL MBA joined the Chartered Institute of Arbitrators (CIArb) as its Director General, on 10 April 2012 until May 2020. He was responsible for developing and implementing the Board of Trustees’ strategy to promote the Institute’s vision across the globe.

Qualified as a solicitor and specialising in civil litigation, Anthony has considerable hands-on experience in Legal Practice Management, which he has reinforced academically by gaining an MBA with distinction from Nottingham Law School. Anthony also sits as a Deputy District Judge. Anthony’s legal background has been complemented and enhanced with leadership and organisational skills acquired in the Territorial Army where he attained the rank of Colonel. Anthony was mobilised in 2006 to undertake an operational tour in Iraq. While there, he worked to improve, and developed a passion for, the rule of law and also dealt with human rights issues. For his work in Iraq, Anthony was awarded the Bronze Star by the United States.

Anthony is involved with a number of military charities caring for the needs of service personnel and their families, as well as local and national charities.

Having been mobilised for service in Iraq as a military lawyer I was deployed to Baghdad in summer 2006. My role was wide ranging, but two tasks were particularly challenging; helping to stand up the Iraqi judiciary so that the rule of law could be reinstated and secondly working within a multi-national organisation across different cultures.

For the first establishing ‘tiger teams’ of judiciary to get out into the country to investigate crime and hold trials was a priority. Learning of 250 individuals who had been held without due process and organising medical support and security for investigating magistrates to do their job was challenging and rewarding. That a release rate of about 50% was achieved and an independent judiciary, brave individuals working under difficult circumstances, were able to undertake their work was a major achievement. Full trials were also commenced.

In November 2006 there were 27 countries working in the coalition. These ranged from the US (139,622) to Singapore (1) and El Salvador (378) to Moldova (12). Co-ordinating Rules of Engagement (ROE) and teaching the Iraqi Army Higher Command about the Law of Armed Conflict was interesting. Facing a Generals viewing ROE for the first time with the comment that ‘with these ROE we will all be killed’ puts mediating boundary disputes into perspective.

What do you consider as the biggest challenge for alternative dispute resolution (ADR) in the future?

To get away from the acronym ADR, which individuals, institutions and the commercial communities do not understand and get us thinking on the front foot in terms of conflict avoidance, management and then resolution.

Thinking about dispute resolution once the problem has arisen is too late. The time to consider how conflict is to be approached and managed needs to be undertaken when deals are being done. In the commercial world entrepreneurs and advisors need to be trained to think through how they will approach bumps in the road when contracts are being entered into. Boilerplate waterfall clauses are all very well but you only have to listen to dissatisfied business leaders who find themselves trying to operate them to appreciate that, without the right tools and an understanding of their use, these clauses can themselves be the source of conflict rather than a route to resolution.

Are there any developments in the field of ADR in which you are particularly interested in?

Conflict Avoidance Boards provide a good example of getting on the front foot to avoid, manage and resolve conflict. Whilst the construction industry has been at the forefront of their development a roll out of the concept to other areas has been too slow.

The narrowing of the diversity between civil and common law approaches to arbitration is fundamental to maintaining the integrity of arbitration as the go to tool for international trade. The 2017 CIArb conferences drove the process forward and the initiative needs to be followed through.

The traditional dispute mechanisms embodied in a number of African state constitutions and the concept of resolution for the benefit of the community is interesting but could be open to abuse.

The challenge to arbitration with the development of Multilateral Investment Courts remains. CIArb’s Evolution not Revolution has begun to address the topic, but it is not one that should be forgotten. Evolution is an ongoing process and the initiative should be constantly reviewed.

ADR is not part of the litigation process but stands alone. Educating users and not just lawyers is important to oil the wheels of commerce. Conflict avoidance, management and resolution is there for all to use but I believe there is also a need to develop a profession of experts in the field.

There has been tremendous development in the MENA region over the past few years and interest in conflict management is growing hugely in Africa. There is an interest at all levels with support from ministers and judiciary. This has been backed by training initiatives and partnerships developed by CIArb.

Tell us about your interests, hobbies or any outside of work activities

With a Norwegian mother it was inevitable that outdoor activities are very much to the fore in my life. My family come from Bergen which is surrounded by mountains and at the heart of the fjords. Holidays involving hiking and, on the water, have been a theme. I enjoy flotilla sailing in the Med, avoiding the cold and tidal complexities of the English Channel. Sport is a passion and I cycle particularly enjoying getting away in January to hotter climates. In the past few years Kate and I have cycled in Myanmar, Sri Lanka, Costa Rica, Vietnam and Majorca. I find understanding the culture and approaches to Rule of Law exciting and enjoyable. Supporting Northampton Saints rugby is a great social activity and an emotional roller coaster. 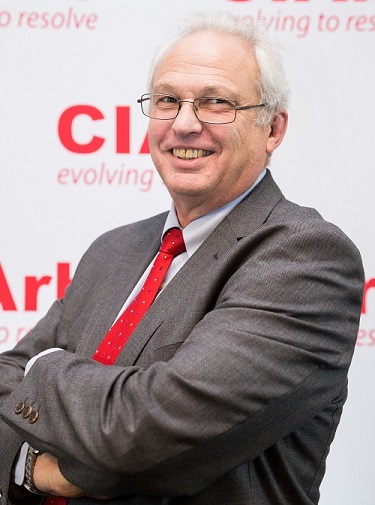