This is an online event hosted by CIArb’s YMG, taking place on 18 February 2021. This event is part of the Europe leg of the CIArb YMG World Tour 2021. This event takes place at 11.00am GMT, 12.00pm CET (Central European Time), please check your local time zone.

WEEK 5, EUROPE: In the past decades, the use of ADR has substantially increased in Western Europe to promote access to justice and strengthen the rule of law. Now with many sanitary measures ordering lockdowns even of courthouses, arbitration and ADR appear as a cost-effective and expeditious alternative to traditional litigation. Join our event for an interactive discussion of ADR-related topics of interest in the region.

Cost(s): Attendance to this online event is free, however pre-registration is required.

CIArb is proud to collaborate with the following ADR institutions in the production of this event: 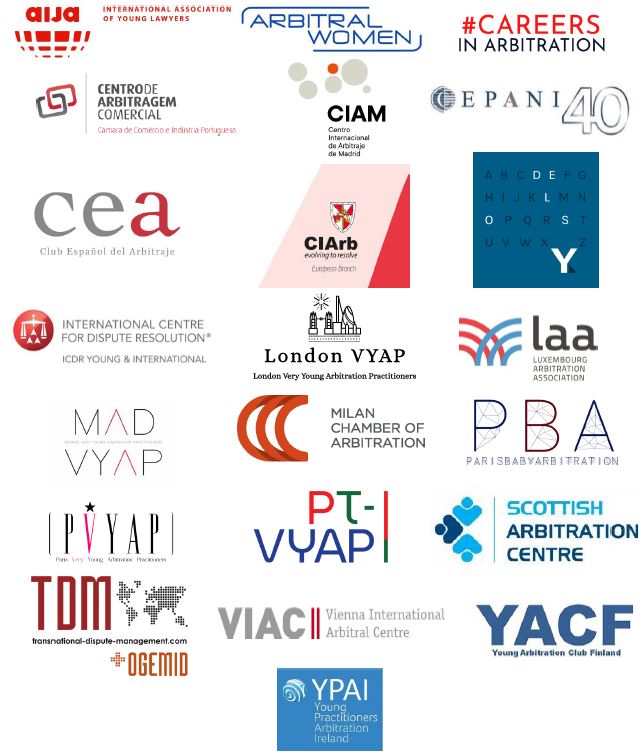 Laura West is a Senior Associate at CMS based in Edinburgh. She specialises in construction, engineering and energy disputes providing both operational and strategic contract advice as well as representing clients through a range of dispute resolution procedures including arbitration, litigation, adjudication and mediation. Laura is dual qualified in Scots and English law and teaches construction law to post graduate students at the University of Edinburgh.

Jalal El Ahdab is a partner at Bird & Bird, in the Dispute Resolution Group in Paris. He is the Head of the Firm’s Arbitration department in France and a member of our Dispute Resolution practice in the UAE, where he offers the clients his longstanding and cross-border expertise in managing international disputes and arbitrations, especially in international business law, notably in Europe, Africa and the MENA region, focusing on international disputes and foreign investments.

Jalal acts as a counsel, an arbitrator and an expert in various sectors such as telecoms, ports, airports, construction, life sciences, sports and more.

Jalal is a member of the International Court of Arbitration of the ICC. He also chairs the European Branch of the Chartered Institute of Arbitrators and is the co-chair of the IBA Arab Regional Forum.

Jalal is qualified to practice in Beirut, Paris and New York, and is equally fluent in Arabic, English and French. He’ll publish in 2021 a book on French Arbitration Law and Practice, with LexisNexis.

Benjamin Lissner specializes in national and international arbitration as well as in other types of alternative dispute resolution. Furthermore, he has extensive experience in state court litigation. He acts as counsel and arbitrator, in particular in post-M&A disputes as well as in commercial disputes and disputes relating to plant construction and involving technical matters. He is experienced in all major arbitration and ADR rules (e.g. DIS, ICC, Swiss Rules, VIAC, SIAC, UNCITRAL and KCAB). Clients are large- and medium-sized companies, including Asian and in particular South Korean enterprises.
Benjamin joined CMS in 2009 and became Partner in 2018. In 2015, he was also seconded to the leading international arbitration team of the law firm Bae, Kim & Lee (now: Peter & Kim) in Seoul, South Korea.

Marc Krestin is a Senior Associate in Allen & Overy’s international arbitration group based in Paris. He joined A&O in 2019 after having worked over 10 years at other international law firms in Rotterdam, Amsterdam and Paris. He specialises in international commercial as well as investment treaty arbitration, and has extensive experience in corporate and commercial litigation before the Dutch courts.

Marc’s experience includes acting as counsel in international arbitrations under various institutional rules, including those of the NAI, ICC, LCIA and ICSID as well as ad hoc proceedings under the UNCITRAL Rules, with a focus on energy, infrastructure, financial services and post M&A disputes. He also regularly advises clients on public international law issues such as sovereign immunity and State responsibility, as well as protection under bilateral and multilateral investment treaties.

Marc holds Masters degrees in both Law and Economics and he is currently pursuing a post-graduate LLM in International Arbitration at Queen Mary University London. He is admitted to the Amsterdam and Paris Bars and is fluent in English, French, German and Dutch.

With over 25 years of experience, Wendy has advised on international law matters and conducted arbitrations under all the major institutions and ad hoc. She has advised a wide range of multinationals, including corporates, sovereign States and State entities and multilateral State organisations.

Wendy has assisted clients across numerous sectors, including energy, natural resources, banking, insurance, financial services, gaming, manufacturing, pharmaceutical, licensing, telecommunications and construction. She has sat as arbitrator since 2005, as sole, co-arbitrator and chair under most major arbitral institutions. Wendy has been appointed by the United Kingdom to the ICSID Panel of arbitrators and ICSID Panel of conciliators effective from 10 November 2020.

In the field of climate change and finance, Wendy acts as global coordinating counsel to various major corporates in relation to climate change transition, disclosure, reporting, compliance and investment. She regularly advises investors and States in respect of climate related physical, transition and litigation risk. She works closely with a number of States in relation to climate transition regulatory structures to mobilise finance and formulate climate investment policy. She also works closely with the International Chamber of Commerce (ICC) and has represented it at the Conferences of the Parties on climate since 2015.

Giovanni Minuto is a Managing Associate at BonelliErede, International Arbitration group. His practice focuses on complex construction, commercial and investment disputes referred to arbitration in ad hoc and administered proceedings before several renowned arbitral institutions such as the ICC, the DIAC, the SCC, the LCIA, the ICSID, the CAM and under the UNCITRAL Rules.

Giovanni has been involved in more than 40 arbitration proceedings, both as counsel and secretary to arbitral tribunals, as well as in DAB proceedings. His cases include large infrastructure projects (mega construction projects, chemical plants, oil & gas and transportation), investment disputes (both under BITs and MITs), post-M&A deals disputes, distribution and license agreements, international sales, first-demand guarantees.

Catherine Schroeder has more than 15 years of experience in arbitration and has acted in numerous arbitration proceedings conducted under all major sets of arbitration rules, as arbitrator, counsel and secretary to arbitral tribunals.

She has just established her own practice as independent arbitrator and counsel in Paris after having spent 11 years at Derains & Gharavi where she was counsel.

Catherine specializes in international commercial arbitration and has experience in a wide range of sectors (energy, intellectual property, joint ventures, licensing, construction). She also assists her clients in annulment proceedings before French Courts.

Catherine is recognized as Future Leader by Who’s Who Legal: Arbitration.

Michael Mcilwrath is Vice President –Litigation for Baker Hughes Company, a world-leading energy technology company. He is based at the company’s offices in Florence, Italy.

Michael is co-author of Negotiating International Commercial Contracts (Eleven Int’l Pub 2020) and International Arbitration and Mediation:  A Practical Guide (Kluwer Law Int’l 2010), a regular contributor to the Kluwer Arbitration Blog, and teaches Legal Writing at Bocconi Law School in Milan.  He is the chair of the ICC’s Governing Body for Dispute Resolution Services and was chair of the Global Pound Conference in 2016-17 (http://globalpound.org/). In 2017, Arbitral Women recognized Michael as a Champion of Change for promoting diversity in international arbitration.

Ana Gerdau de Borja Mercereau is an associate at Derains & Gharavi, with more than 12 years of experience as counsel and secretary to arbitral tribunals in international and domestic commercial and investment disputes, under the rules of the ICC, ICSID, ICDR/AAA, LCIA-MIAC, the Center for Arbitration and Mediation of the Chamber of Commerce Brazil-Canada (CAM-CCBC), the Câmara de Conciliação, Mediação e Arbitragem Ciesp/Fiesp (CCMA CIESP/FIESP), the Câmara de Arbitragem Empresarial – Brasil (CAMARB), the Câmara de Arbitragem do Mercado BM&FBOVESPA (CAM-BM&FBOVESPA) and the Arbitration Center of the American Chamber of Commerce in Brazil (AMCHAM-Brazil).  Her cases have included commercial transactions and joint ventures, large infrastructure projects (in construction, renewable energy, oil & gas and transportation), M&A deals, and projects for mining research and exploration.

She is a member of the ICC Commission on International Arbitration and ADR, upon nomination of the Brazilian Committee, of its Task Force on corruption in international arbitration, and of ICC Brasil.  She was a member of the ICC Task Force on the revision of ADR, expert and dispute board rules (2012-2014).  Ana is also one of the founders of the Rising Arbitrators Initiative and co-chair of its Executive Committee.  Ana is YMG Representative of the CIArb European Branch and a member of the YMG CIArb Global Steering Committee, of the Delos’ Long View Steering Committee, and of the Advisory Board of GLIP-CRC of the University of São Paulo.

She is admitted to the Bars of Brazil (São Paulo) and Portugal (Porto) and is registered with the Paris Bar (Directive 98/5/EC).  Ana holds a PhD (Investment Arbitration) and an LLM (International Law) from the University of Cambridge and works in French, English, Portuguese and Spanish.

His publications include, inter alia, a chapter – as a co-author with Marc Krestin – in S. Balthasar (ed) International Commercial Arbitration (Hart Publishing) (2021).  He is admitted to the Thessaloniki Bar in Greece and holds degrees from the University of Amsterdam and the Aristotle University of Thessaloniki.  Georgios is a member of the CIArb YMG Global Steering Committee.

Get in touch for Sponsorship Opportunities